«There is not a single gram of drugs in the file of the Flores cousins. There is applied what Commander Chávez always said about his theory of the Bolas Criollas (Creole Bocce lawn balls game); Since they can not reach the snitch they hit the ball that is closer to it. What underlies it is a political component. Some DEA agents who got paid $2 million to mount the case. »
This statement was made by Pedro Carreño, deputy of the National Assembly Homeland Block (AN), during an interview conducted on Thursday in the program «La Pauta de Hoy» (The Schedule of Today), broadcast by Venezolana de Televisión, on the case of the nephews of the presidential family held as prisoners in the United States accused of participating in a conspiracy to bring drugs to that country.
«Precisely the day on that Venezuela joined as a member of the United Nations Human Rights Organization and when President Nicolás Maduro was going to give the speech of entry to this body, the news in the world was that nephews of the presidential family had been captured by the DEA for crimes of drug trafficking, which shows that it is a political strategy of the imperialism in order to destabilize the Bolivarian Revolution», said the parliamentarian.
In his speech, Carreño said that the montage against the nephews of the first fighter woman, tries also to influence the public opinion around the peace talks. «It is no coincidence that they have not given the final sentence, but they will wait until March, because the success of the dialogue process promoted by the Bolivarian Government is indisputable and is a dialogue to guarantee the peace of the Venezuelan people.»

Spanish media failed in their attacks against Venezuela

COVID: 683 new infections in Venezuela during the last 24 hours 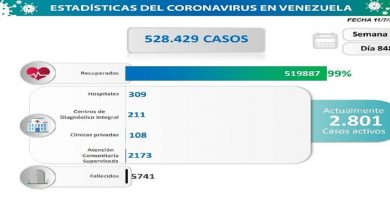