The Bolivarian Government rejected a statement, the 2015 Report on Terrorism by the United States Department of State, a document that constitutes a new interventionist action against a sovereign State.
The Bolivarian Republic of Venezuela denounced the US double standards in the application of this kind of report, while reiterating that «Venezuela is a territory free from this scourge».
Read below the full statement from the Ministry of People’s Power for Foreign Affairs:
The Bolivarian Republic of Venezuela categorically rejects the slanderous mentions of Venezuela contained in the 2015 Report on Terrorism, issued by the United States Department of State of America.
The Bolivarian Government calls for the cessation of unilateral practices of the Government of the United States of America. That country has no mandate to assess sovereign states in any matter, including terrorism, and therefore must abandon its interventionist practices that contravene the rules of law internationally recognized by civilized nations who believe in international action in strict compliance with the Charter of the United Nations.
The Bolivarian Republic of Venezuela condemns all forms of terrorism, including state terrorism, and reaffirms that Venezuela is a territory free from this scourge.
Likewise, we denounce the double standards of the Government of the United States in implementing reports and sanctions in this matter, since the International Community has had ample access to credible reports about the origin, training and financing of terrorist groups that openly act against entire peoples in the Middle East and Africa, causing social vulnerability and terrible violation of human rights in those countries.
The Bolivarian Republic of Venezuela reiterates to the US Government that bilateral diplomatic relations must be framed on mutual respect, non-interference in internal affairs and sovereign equality of States, guiding principles established in international law for conviviality between countries.
Caracas, June 6, 2016 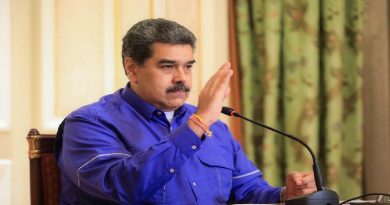 President Maduro calls for a profound renewal with the 3Rs. Nets

Rodríguez Zapatero: «DEC-6 elections must put an end to unfair and incomprehensible sanctions against Venezuela»

Chancellors of Venezuela and Suriname pledge to strengthen bilateral relations

Venezuela denounces entry of US war ship into contiguous zone