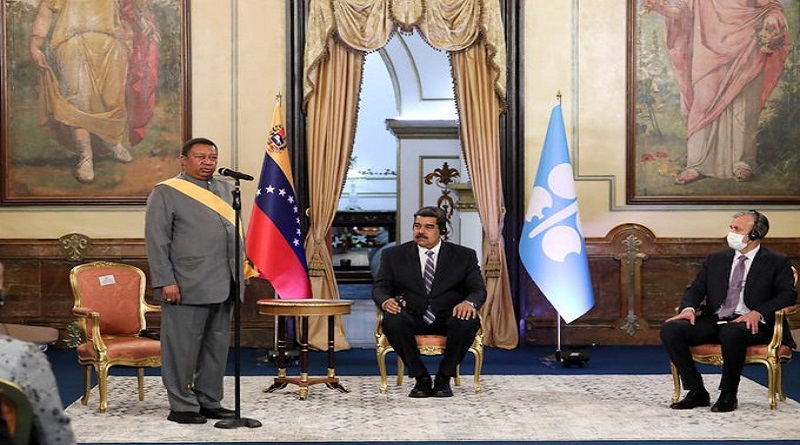 «Oil, gas, the world’s main energy resources, must be out of any geopolitical dispute, any ideological dispute, any type of sanctions,» said the President of the Bolivarian Republic of Venezuela, Nicolás Maduro on Thursday in the framework of the meeting held at Miraflores Palace with OPEC Secretary General Mohammed Barkindo.

After awarding the «Francisco de Miranda Order» in its «Generalissimo» Class to the illustrious visitor, the Head of State assured that this meeting «is an act full of truths on a path that we have had to travel and that by evaluating it allows us to draw important lessons”.

He affirmed that after six years at the head of the organization, Mohammed Barkindo «delivers a standing, strengthened, expanded and victorious OPEC.»

He recalled that OPEC, in its 60 years of existence, has had seven great moments, “that is why we must have wise people among us. Of those seven moments, Barkindo has had two as Secretary General and we are now at the beginning of another moment”.

Of the stages experienced during Barkindo’s administration, he highlighted year 2015, in which oil prices collapsed, before which were taken measures from Venezuela, such as touring the oil-producing countries, with an approach: «The need to configure a new alliance with OPEC and non-OPEC countries to stabilize the market”.

The result was the signing, in December 2016, after several meetings and debates, of the first joint oil production agreement between OPEC and non-OPEC countries.

He pointed out that the OPEC + mechanism controls just over 60% of the world’s oil market, «we managed to stabilize the market, we recovered the levels to full levels and then they went to optimal levels.»

He commented that crisis began as a war against the Venezuelan economy: “The criminal sanctions against PDVSA, theft of assets, of accounts, but Venezuela remained firm in OPEC, in OPEC+, promoting everything that had to be promoted, we had a hard fall».

Regarding the sanctions against Russia, President Maduro stressed that the boomerang effect against the world economy is being seen after sanctions on Russian oil and gas: «They are affecting the entire world.»

Given this scenario, he insisted that the world cannot allow energy resources to be used as a weapon of aggression in the face of geopolitical conflicts.

For his part, Mohamed Barkindo expressed: «We are going to work shoulder to shoulder with you throughout your mandate”, and thanked the leadership of the Venezuelan Head of State to strengthen OPEC and reach agreements with countries around the world:

«Throughout this period you were firm on the side of OPEC, you provided the necessary leadership (…) On behalf of OPEC, I deeply thank you for this leadership that you have shown. OPEC is Venezuela!» said Barkindo.

In this regard, he assured that the National President was a determining factor for OPEC to return to being a coherent force and a united and solid organization, «then you made other non-OPEC countries join us”.

Barkindo extolled Venezuela’s leadership in the oil world and expressed that «just as Chávez did, that flame must continue to shine, we cannot allow the flame to go out in any way (…) you -President Maduro- were a determining factor for OPEC to become a force again”.

He predicted: «In 2045 and beyond, oil and gas will continue to represent more than 50% of the global energy mix and there is no scenario that shows how renewable energies can replace hydrocarbons”.

Likewise, he urged world leaders to respect the basic principles of OPEC: «oil can never be politicized, it cannot be used as a political weapon”.

Referring to the Venezuelan oil and gas reserves, Barkindo stressed that these are proven to be the largest in the world: «They are there for the good of the international community» and congratulated President Maduro «for his heroic efforts to protect the Bolivarian Republic from Venezuela».

Mohammad Barkindo will hand over, next August, the position of Secretary General of OPEC to Haitham Al Ghais of Kuwait, for the 2022-2025 term.

Maduro: The awakening of the peoples is felt with a greater force 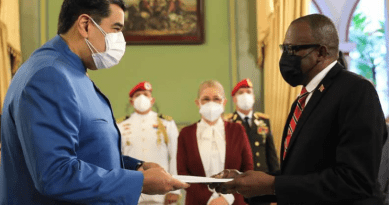