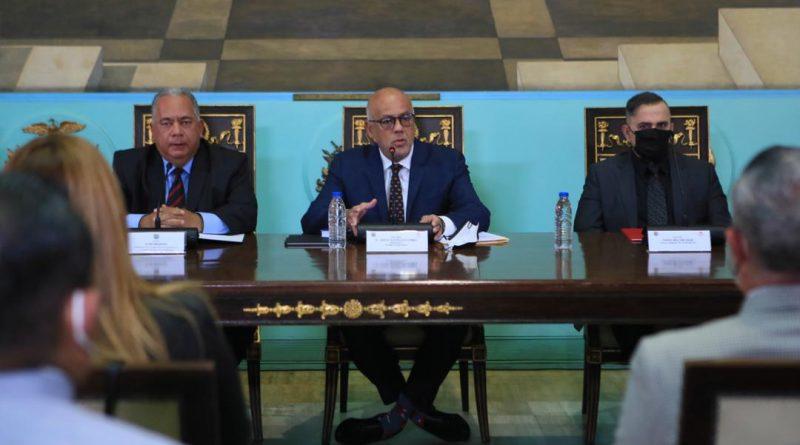 The National Assembly received this Tuesday from the Republican Moral Council, the list with 254 eligible to select the magistrates of the Supreme Court of Justice, the Inspector General of Courts and the Directorate of the School of the Magistracy.

Elvis Amoroso, Comptroller General of the Republic; Tarek William Saab, Attorney General; and Alfredo Ruíz, Ombudsman; representatives of the three powers that make up the Republican Moral Council, delivered the list to deputy Jorge Rodríguez, president of the National Assembly.

In this regard, deputy Jorge Rodríguez, stated that in compliance with the Constitution of the Bolivarian Republic of Venezuela, which establishes the evaluation by the Republican Moral Council, those Venezuelans who have chosen and fulfilled the requirements established in the Carta Magna and the Organic Law of the TSJ, placed their credentials for the purpose of being evaluated by the Judicial Nominations Committee:

“Since December 30, 2021, when the Special Commission for Dialogue, Peace and National Reconciliation met and evaluated a proposal from the President of TSJ (Supreme Judicial Court), Maikel Moreno, to consider a profound reform of the Organic Law of TSJ that would promote increasing, even more, the guarantees in terms of human rights and administration of justice established in our Constitution, we quickly gave ourselves that task. This Assembly proceeded to discuss and reform the Organic Law of TSJ, which led to elements as important as bringing back to 20 the number of main and alternate magistrates in the different courtrooms, to the establishment of more rigorous requirements for the selection of the General Inspector of Courts and of the Directorate of the School of the Magistracy”, explained the president of the Legislative Branch.

Likewise, he indicated that, within the established period, the Republican Moral Council evaluated the credentials and today they appeared in the AN with 254 names of women and men who have gone through the entire process established for the evaluation and selection of credentials:

“During the next 5 continuous days, the deputies of the AN are going to proceed with the respective evaluation, so that Venezuela has in a peremptory period with a renewed Judicial Power, which guarantees rapid justice and attends to those who care the most. and attention they deserve from the State”, assured the highest authority of the National Assembly.

Also, he thanked the work carried out by the Judicial Nominations Committee led by deputies Giuseppe Alessandrello as president, and José Gregorio Correa as vice president.

Rudder change! President Maduro appoints board of directors of PDVSA

Chancellor Rodriguez arrived in the Republic of Iraq

For persisting contempt and before expiration of the period, TSJ appointed rectors of CNE