The sectoral vice president for political sovereignty, security and peace, G / J Vladimir Padrino López, denounced this Saturday before the international community, multilateral organizations and human rights organizations, the infamous kidnapping of Bolivarian soldiers, by irregular groups in the border with Colombia.

General in Chief Padrino López read a statement to inform about the action of paramilitaries, and exhorted to proceed to the release of Venezuelan officers:

«These factions use murderous and cowardly methods such as anti-personnel mines and remotely detonated explosive charges, which caused the death of military personnel and caused serious injuries to others, some of them with limb mutilations and permanent disabilities. Likewise, eight military professionals were captured in the combat actions, from whom, on May 9, we received a faith (proof) of life», quotes the statement.

Padrino López reaffirmed the FANB’s commitment to guarantee the integrity of national sovereignty and expressed the solidarity and unconditional support to the relatives of the colleagues, «who in a gallant and stoic manner continue to honor the Sacred Oath of defending the Homeland; We will not skimp any effort and we will exhaust all possible ways to recover them healthy and safe”.

«We ratify the unwavering commitment to guarantee the territorial and sovereignty integrity of the nation, which is not negotiable, strongly reiterating that we will not tolerate armed groups outside the law, in any space of national geography,» concludes the release of this Saturday.

Apure state lives from last March 21 constant clashes between the Armed Forces and Colombian armed irregular groups; Terrorist organizations dedicated to drug trafficking, kidnapping and extortion, among other criminal activities, which have declared war on the Venezuelan State and the people.

A total of 4,156,567 people are enrolled in the Bolivarian National Militia 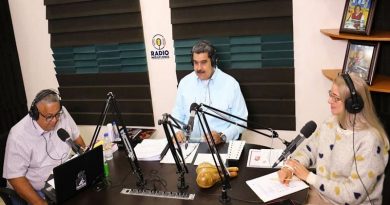 Began consultation on Convention of Boys, Girls and Adolescents

Venezuela does not need humanitarian aid