The President of the Truth Commission, Delcy Rodríguez, communicated the decisions taken by this stance, in order to enforce the purpose of exercising justice and the reparation of the victims in order to achieve peace.

Following are the conclusions of the working meeting held this Saturday by representatives of the Commission on Truth, Justice, Peace and Public Tranquility:

1.- The Truth Commission will classify those deprived from liberty, in order to organize the cases according to the seriousness of the punishable act that has been imputed.

2.- From the Truth Commission, they are carrying out a study – based on international experiences – of Care for the work with young people who have been involved in violence, concerning the announcements made by the Head of State to include them in special programs for their care.

3. In the coming days, will welcome officials injured in acts of violence and the relatives of officials who have lost their lives while fulfilling their duties.

During her speech, Delcy Rodríguez, who presides this stance, stressed that «there will be determination of responsibility and justice will be applied without any kind of distinction».

5.- She announced that to this stance came the father of David Vallenilla (who died in the midst of violent protests in the siege to the La Carlota Military Base) with a letter in which he requested that his son’s case be attended by this Commission.

6-. The Truth Commission will prioritize the attention of violent events that occurred this year, mainly. However, she recalled that its powers cover the period from 1999 to 2017.

7.- The Truth Commission has registered more than 3,000 cases of victims, including injured and deceased, who will be investigated. 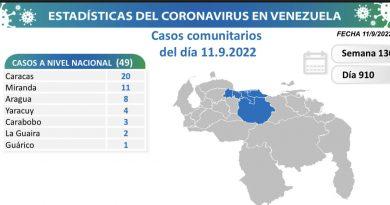 Maduro: This Monday begins vaccination against COVID-19 for children over 2 years of age

Was approved Decree of convocation for constituent dialogue for diversified economy

Chancellor Arreaza at NAM: The US intends to withdraw Venezuelan representation credentials from the UN