The inmates of the David Viloria prison (Uribana) located in Lara state, used codes and symbols of the violent group of the Venezuelan opposition, during a riot that ended on Tuesday leaving as a result several deaths, injuries, and officials taken as hostages since last Saturday, March 19th.
An analysis prepared by experts of the prison area, indicates that during the violent events in the  David Viloria prison, the inmates exhibited Venezuela flags placed upside down, and banners with the legend «S.O.S. Venezuela «, as did the violent activists who caused severe public disorders in 2014 in several cities of Venezuela.
The study, obtained exclusively by the research blog «La Tabla» (The Table), shows photographs of hooded inmates on the roof of the prison, holding a cloth with the text of international aid to convey the message that Venezuela is experiencing a situation of terror.
There is another graph where is seen a number of objects placed as barricades and set on fire, with the tricolor flag upside down, as did groups of radical opposition during the «Guarimbas» (street riot barricades) of 2014, especially those linked to the «Voluntad Popular» (People’s Will) party of Leopoldo Lopez.
The mutinous inmates claim was based on being transferred to the prisons of Tocorón and Tocuyito, on where has not been implemented yet the new prison regime that seeks to regularize the prisons and thus ensure their control by the State.
The balance of the conflict was of three inmates and a custodian dead by the explosion of a grenade, as well as 18 injured.
During the four days of violence remained hostage 15 employees (8 men and 7 women) who finally were released on Tuesday at noon hours.
The negotiations that ended the violence involves the relocation of a group of inmates to the Tocorón and Tocuyito prisons, a process that began on the afternoon of Tuesday, March 22.
The paper concludes that «It is left a clear evidence of the links of the inmates at the David Viloria prison and the leaders of the Venezuelan opposition that, under the same violent and symbolic codes, intend to tarnish the efforts in favor of the population that the National Government makes under the leading of President Nicolas Maduro. « 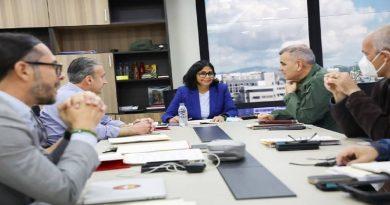 Jamaica and Venezuela are working on energy and trade agreements

JVR: Maduro’s economic initiatives claim the authority of the State

Héctor Rodríguez: We expect the AN to take the appropriate measures to return to normality