The Prime Minister of the Republic of Cuba, Manuel Marrero, began this Monday an official three-day visit to the Bolivarian Republic of Venezuela, with the purpose of strengthening bi-national cooperation, within the framework of the solid strategic alliance between both nations.

The reception at the Simón Bolívar International Airport, in La Guaira, was in charge of the Vice Minister for the Caribbean of the Venezuelan Chancellory, Raúl Li Causi:

“We will be working on these bonds of friendship, looking for other ways to strengthen mutual interests, and happy to share these days with you. I reiterate my greetings to the Venezuelan people”, he expressed upon arriving on Bolivarian soil.

The Cuban Prime Minister thanked the condolences and accompaniment provided during the explosion at the Hotel Saratoga in Havana, which claimed the lives of more than 20 people last week:

“We are here to support the constitutional president Nicolás Maduro and the civic-military union of the Venezuelan people, who, much alike the Cuban people, has been blocked, pressured, but who has chosen to be free, independent and with its own criteria”.

The Cuban politician plans to meet in Caracas with different authorities of the Bolivarian Government, including President Nicolás Maduro Moros.

Marrero has extensive experience in the tourism sector. In 2004 he was appointed by Commander Fidel Castro to be in charge of the Ministry of Tourism, a position in which he remained for 15 years.

President Maduro denounces sabotage and terrorist plan against the nation

Vice President Rodríguez: «All our struggles and victories are thanks to the heroic people of Venezuela» 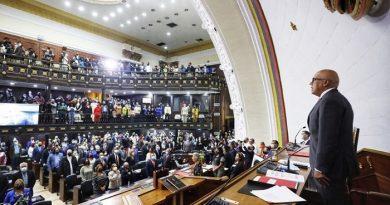 Cabello: Anyone who asks for an invasion against Venezuela should be treated as a traitor

Support! 51% of Venezuelans support Maduro in fighting the economic war