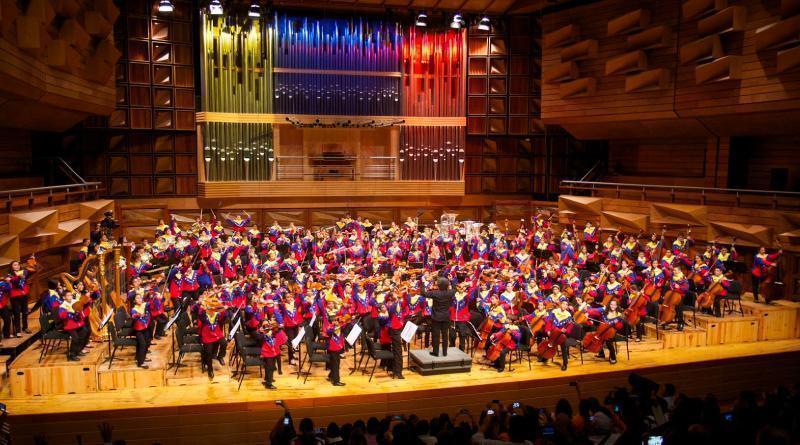 The National System of Youth and Children’s Orchestras and Choirs of Venezuela (“El Sistema”) «is a work product of a gigantic soul, infinite for love, for peace, for the kindness that they represent in each musical note,» said this Friday the Executive Vice President of the Republic, Delcy Rodríguez Gómez, during a concert in Caracas on the occasion of the 47th anniversary of the creation of El Sistema.

Rodríguez offered a few words prior to the start of the activity where she sent a hug to the Orchestra System on behalf of the President of the Republic, Nicolás Maduro:

“On behalf of the president I bring a hug to the girls and boys. The Guinness System, as the whole world already knows you, because we know how wonderful you are capable of creating, playing and fighting as Maestro Abreu used to tell us”, she expressed from the Acoustic Shell of Los Caobos Park.

Likewise, the Executive Vice President recalled that this extraordinary work celebrates its birthday on the same day that is commemorated the heroic deed of General José Félix Ribas in the Battle of La Victoria: «With our glorious youth that defeated and gave victory over the Spanish forces, this is how our independence is written and you write music commemorating that heroic Venezuelan youth”, she emphasized.

The concert in honor of El Sistema, created by maestro José Antonio Abreu, was performed by the Simón Bolívar Symphony Orchestra, made up of different generations that have made an artistic life within this group.

Along with them was the Simón Bolívar National Choir, directed by teacher Lourdes Sánchez, under the direction of teachers Andrés David Ascanio, Jesús Uzcátegui and Enluis Montes, with 300 artists on stage.

It is important to remember that 2021 was a year full of transcendental triumphs and achievements, among which are having reached the Guinness World Record, as «The World’s Largest Orchestra»; The First World Congress was also held, bringing together more than seventy countries that have replicated this musical pedagogical model of social action.

In memory of Maestro Abreu:

It is worth noting that the Los Caobos Park Acoustic Shell is the most modern in Venezuela and was conceived by the visionary genius of Maestro José Antonio Abreu, with the purpose of making open-air concerts surrounded by nature, similar to the successful experiences of the big cities.

El Sistema continues to open new horizons and its members look to the future inspired by the thought of Maestro Abreu, whose message remains focused on ensuring that Venezuela was a great orchestra of wills, aspirations, vocations and actions, «each one of us as citizens must enter the great Venezuelan enterprise, in the construction of a just country, where peace and life are the great conquest”, expressed the creator of El Sistema during his lifetime.

President Maduro: This year there will be elections in Venezuela

Chinese representative to the UN urges dialogue in Venezuela

El Aissami: 2017 will be the year of the productive economic take-off