The President of the Bolivarian Republic of Venezuela, Nicolás Maduro, reported that the Bolivarian Government will request Spain the capture and extradition of opposition politician Leopoldo López, for financing and planning the terrorist attack against the National Electoral Council (CNE), a criminal action that intended to set on fire the warehouse of this institution located in Mariches, Miranda state.

The Head of State recalled that “a group of mercenaries and terrorists who had the mission of attacking the CNE warehouse, were captured and neutralized thanks to the intelligence of the Venezuelan State police forces”.

«They have already been captured, convicted and confessed,» he assured.

He explained that, from the confessions, it was determined that the orders and resources to execute this plan came from Spain: “The plan, the money, everything was planned in Spain. The mastermind, is (a member) of the Leopoldo López gang, it is he who is behind all this, with his right-wing extremist groups.

He explained that “in this warehouse there are the machines and the sets with which the elections will be held next Sunday, November 21″.

He detailed that the evidence found in the investigation, as well as the statements of the material authors led directly to those who gave them the orders: «He lives in Spain, and this person is from the intimate circles of Leopoldo López in Madrid”.

He stressed that it is not the first time that Venezuela has made this denounce, «nor of that terrorist and violent attacks are planned from Spain against the internal security of Venezuela”.

During the balance journey of the fight against COVID-19, held at Miraflores Palace, the President presented the evidence collected during the investigation process.

For his part, Admiral in Chief Remigio Ceballos, Minister of People’s Power for Internal Relations, Justice and Peace, asserted that it was “the same group that tried to affect the 2020 parliamentary elections and the subsequent installation of the National Assembly (AN) on January 5, 2021″.

“Antorcha” coordinated the actions with fugitives Leopoldo López and Iván Simonovis. The detainees had explosive material and fuel drums, as well as 95 leaflets related to a self-styled «American Continent 2020» operation, he said. 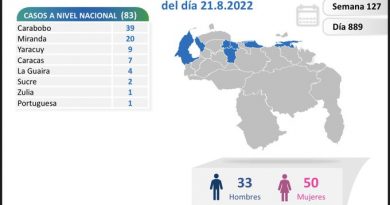 Jorge Rodríguez: Of the 5 points agreed in the dialogue process, MUD has violated 4 and a half