In the Federal Legislative Palace, this Wednesday, April 28, 2021, honors were paid to the Sectoral Vice President for Social and Territorial Socialism and Minister of People’s Power for Education, Professor Aristóbulo Istúriz, who died on Tuesday, April 27 around midnight .

On the shoulders of the cadets of the Bolivarian National Armed Forces (FANB), arrived the coffin with the mortal remains of the 74-year-old revolutionary leader, which was placed in the Elliptical Room of the seat of the Venezuelan Parliament.

In that venue, personalities from the political life of the country and the people in general, attended to honor the memory of this distinguished Venezuelan teacher.

Authorities of the Bolivarian Government, accompanied Minister Istúriz in burning chapel; Among those present was the President of the Bolivarian Republic of Venezuela, Nicolás Maduro, who, accompanied by his wife, Deputy Cilia Flores, the head of state expressed his deep sorrow for the loss of this brother in struggle.

For his part, parliamentarian Diosdado Cabello stated: “today is a difficult day, it is not just anyone, it is our Aristóbulo, the tireless one, the one who always had time for whatever it was (…) a prosperous humanism of who considered being human the reason for the Homeland».

Also, the presidents of the Permanent Commissions of the National Assembly, made a parade of honor, before the coffin of the Sectoral Vice President for Social and Territorial Socialism, Aristóbulo Istúriz.

ANC gathers proposals to give constitutional rank to educational missions

Clark: We will continue in the ongoing fight against corruption 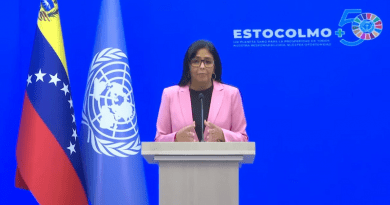 Delcy Rodriguez: Luis Almagro is an enemy of Venezuela