President Nicolás Maduro announced that the Bolivarian Government will carry out «a special plan to bring to the country, before Christmas, those nationals who are being persecuted and victims of xenophobia in countries such as Peru, Ecuador and in any other nation.»

“I have given the order to the Executive Vice President, Delcy Rodríguez; to Chancellor Jorge Arreaza, to make a special plan to bring back before Christmas everyone we can bring who is being persecuted in different countries, as well as giving all the support for Venezuelan migrants in the world, » he stated.

The Head of State also instructed the Venezuelan Chancellor, Jorge Arreaza, to establish communication with the Secretary General of the United Nations Organization (UN), Antonio Guterres, in order to inform him how badly have acted instances such as the United Nations High Commissioner for Refugees (Acnur) and the International Organization for Migration (IOM), in regard to Venezuela:

«Chancellor, call the UN Secretary General, and tell him how badly the IOM and UNHCR have behaved with Venezuela, very bad,» he said.

Likewise, he commented that this week, in the context of the Vuelta a la Patria (Return to the Homeland) Plan, on totally free of charge flights on the Conviasa airline, 406 nationals returned to the country, of these 228 arriving from Panama and 178 from Ecuador.

Likewise, he pointed out that these flights will be maintained for compatriots to return from Peru, Chile, Ecuador, Panama, the Dominican Republic, and other countries.

Denial campaign on great transformations of the country:

The head of state denounced a permanent campaign against Venezuela, one of denial of the great transformations that the country has undergone and that are being maintained, despite the criminal blockade that weighs over the Nation.

«Despite the blockade, despite the attacks, we maintain public, free, quality education at the highest level,» he stressed.

Rodriguez Araque: Venezuela faces a communications strategy that aims to isolate it from the world 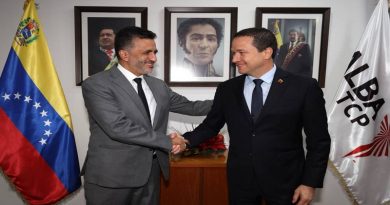 AN approved agreement to support the Anti-Blockade Law

Public Ministry can not be above the Venezuelan State