The Republican Moral Council will present to the United Nations Organization (UN) the denounce about the abuses perpetrated by Peruvian authorities against Venezuelan magistrates Indira Alfonzo, vice president of the Supreme Court of Justice (TSJ), and Arcadio Delgado, vice president of the Constitutional Chamber.
This was reported Thursday by the president of the instance, the Comptroller General of the Republic, Elvis Amoroso, accompanied by the Attorney General of the Republic Tarek William Saab and the Ombudsman, Alfredo Ruíz, during a press conference convened to express his rejection of the xenophobic actions that have been taking place against Venezuelans in Peru.
The document issued this Thursday by the governing body that integrates the Citizen Power in Venezuela will be delivered to the United Nations representation in the country and to the diplomatic representation of Peru.
The communication refers to the prohibition of entry to Peruvian territory of the two magistrates who were to represent the nation at the Second Preparatory Meeting of the 20th Ibero-American Judicial Summit. The magistrates arrived last Tuesday in Lima, the Peruvian capital; however, at the airport the immigration authorities of that nation prevented their entry and notified them that they should return to Venezuela.
Peruvian officials referred to immigration restrictions ordered by the Government of Peru, while the Bolivarian Government denounced the measure as a flagrant violation of its obligations as a host country.
«We express our overwhelming rejection of the unusual and neo-fascist action of the Peruvian authorities that embarrassingly not only prohibited entry, but also the participation of magistrates in preparatory meetings for the 20th Ibero-American Judicial Summit in that country», said Attorney General Saab
In his statements, the head of the Office of the Public Ministry added that the illegal action by the government of Peru is another escalation of the cartel known as the Lima Group that seeks to damage the democratic coexistence and image of Venezuela. 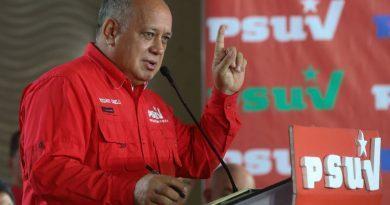 Cabello: We go to the revival of the house-by-house!

20,000 youths of the Chamba Plan integrate into the labor and educational system of the country

Venezuela held a meeting with the Unesco chapter of NAM bureau

Roy Chaderton: Ramos Allup made a fiasco in the OAS and lost the empire's money