The AB Simón Bolívar School Vessel arrived on Saturday to La Guaira after its tour through international waters in its 31st Caribbean Foreign Instruction Cruise – 2019.
The Commander of the Bolivarian National Navy, Admiral Giuseppe Alessandrello Cimadevilla, welcomed the cadets while thanking them for completing the tasks entrusted during four months of navigation:
«We are proud of the return to the Homeland of the vessel of our navy, for having fulfilled the mission of forging, educating and tempering the ladies and gentlemen who make up the fourth year of the Military Academy of the Bolivarian Navy», said the Admiral in a broadcast by Venezolana de Television (VTV).
He also noted that «The cadets carried a message of peace beyond our jurisdictional waters, showed the demonym of the Venezuelan people; Our flag was deployed in the Caribbean Sea basin as it has always been deployed. Double thanks for the fulfillment of both tasks», added Giuseppe Alessandrello.
The Admiral added that after the preparation of the cadets, they will be part of the Bolivarian Navy.
He also urged the cadets to increase their patriotic awareness: «we are a people who have faced difficulties and will always succeed and continue to win», remarked Alessandrello Cimadevilla.
The Simon Bolivar School vessel visited countries such as Cuba, Nicaragua, Mexico, Saint Vincent and the Grenadines, as well as 40 international ports, with the purpose of exchanging knowledge in the maritime area. 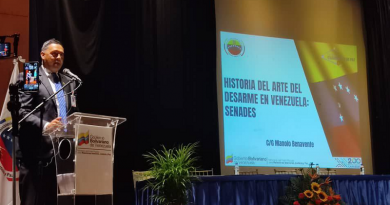 SENADES strengthens strategies for disarmament and control of weapons and ammunition

Maduro: This election will strengthen political dialogue and governance

Maduro: We have the challenge of consolidating peace

President Maduro officializes use of Petro in international operations