The First Vice President of the United Socialist Party of Venezuela (PSUV), Diosdado Cabello, reiterated on Wednesday night that the Bolivarian Government will not tolerate any blackmail or conditions by the right wing for the dialogue convened by the Executive in order to preserve peace in the country.
He also reaffirmed that in Venezuela there are no possibilities of holding a revoking referendum for this 2016, a mechanism requested by the right wing before the National Electoral Council (CNE) against President Nicolas Maduro.
«We are not negotiating anything at all with the right wing, when they say there must be a referendum in order to have a dialogue, well, there will be no dialogue then, because we will make it easy for there to be a referendum here in Venezuela. There are no conditions of any kind for a dialogue, if they want a referendum they must meet what is provided for in the Constitution», said Cabello from the Mountain Headquarters in Caracas, from where he broadcast his weekly program «Con el Mazo Dando» (Hitting with the hammer).
He insisted, moreover, that the Venezuelan right wing does not really want a revoking referendum, but they rather intend to use this constitutional figure in order to destabilize the country.
«What they really want is to use an instrument within this Constitution in order to destabilize this country and then say that this Constitution is not being met. No, it is not being met, we are demanding for its compliance, but a compliance to the letter, as it should be», said the parliamentarian.
In different opportunities and in diverse scenarios, the revolutionary leader has been emphatic to ensure that in the Homeland of Bolívar there will be no revoking referendum, as long as are breached the parameters established in the Venezuelan Constitution and the laws.

Venezuela ratifies willingness to advance in its relations with Iran 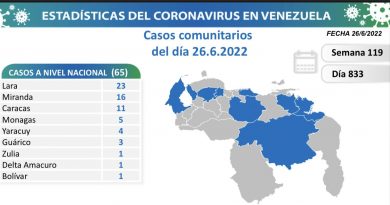 COVID: 925 contagions in Venezuela, Caracas with the highest number of cases in the last 24 hours

Venezuelan electoral system is the safest in the world: One vote, One voter

President of TSJ sworn in the country’s judges