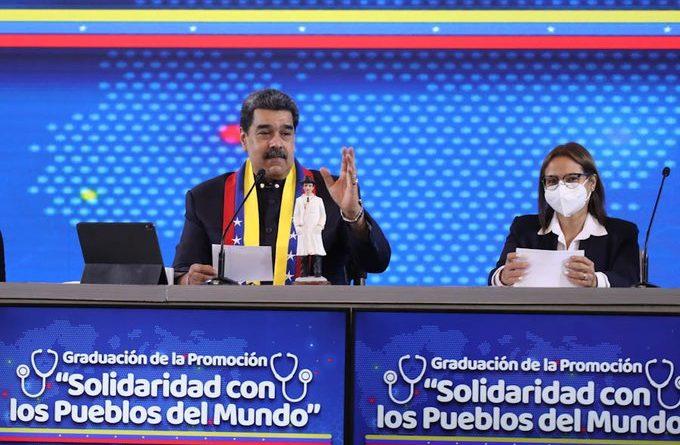 The President of the Bolivarian Republic of Venezuela, Nicolás Maduro Moros, ordered this Thursday the preparation of a special expansion plan for the Latin American School of Medicine (ELAM) “Dr. Salvador Allende”, aimed at expanding the training processes of doctors and health professionals in Latin America.

The national president entrusted this task to the rector of the UCS (University of Health Sciences) Carlos Alvarado, as well as the vice president for Social and Territorial Socialism, Mervin Maldonado, and the ministers of People’s Power for University Education, Tibisay Lucena, and Health, Magaly Gutiérrez.

The Head of State explained, during his speech at the graduation ceremony for 1,864 new health professionals, held at the Military Academy Theater, that the initial objective will be aimed at training a thousand young Colombians «so that they will practice medicine for the people of Colombia”, Maduro pointed out, expressing his solidarity with the neo-granadean population that today suffers from having an inefficient health system due to the neoliberal policies carried out by the administration of Iván Duque.

President Maduro stressed that this humanist vision is one of the legacies of commanders Hugo Chávez and Fidel Castro, who promoted this integrationist dream.

In this regard, he reiterated that the expansion of the UCS «is the way to honor our love for humanity», establishing the importance of ethical training, with a new awareness and high scientific level for health students.

Likewise, he encouraged graduates in Integral Community Medicine to continue with their postgraduate studies and specialization in the different programs offered by the health training system:

Adequacy of the University Admission Plan:

Reiterating the need to adapt the National Plan for University Admissions to the priorities of socioeconomic, scientific and political development, the head of state also instructed to pay special attention to the training of Integral Community Doctors (MIC).

In this sense, he insisted that «the number of new admissions in Comprehensive Community Medicine cannot drop below 30,000», an action that will soon contribute so Venezuela «may bring thousands of male and female doctors to the world» to guarantee health, life and the happiness of the peoples of Latin America.

Nigeria and Venezuela agree to strengthen exchanges between the two nations

It does not stop! Maduro: The dialogue table continues to advance and strengthens

Arrested 16 people for breach of contracts with the Delagro Corporation

Maduro: Social Works of the Revolution continue their march with the accompaniment of the people

Mission Bases will have a Statistical System