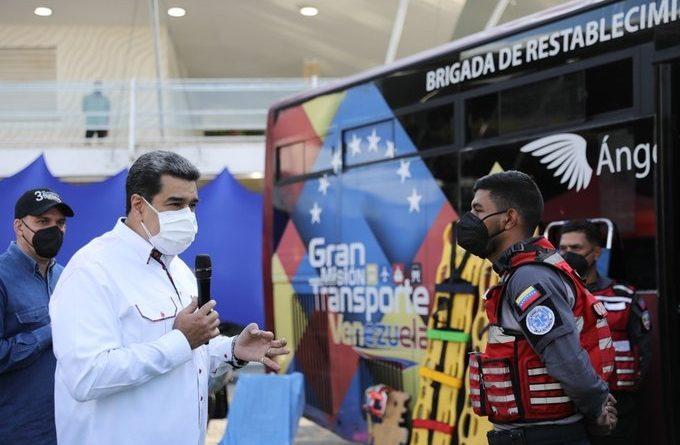 The President of the Republic, Nicolás Maduro, ordered this Thursday to advance in the formation and activation of surveillance, mechanical assistance and health brigades on the country’s highways.

During his participation in the commemorative act for the third anniversary of the Great Mission Transport Venezuela, the Head of State pointed out that must be guaranteed the permanent patrolling, communications, timely attention with ambulances, tow trucks and comprehensive assistance to drivers and users of the highways:

«All highways must have a permanent motorized surveillance service, secure communications and a 24-hour service with ambulances, tow trucks and mechanical support”, he said, reiterating that the resources generated by the payment of tolls must be remunerated in services for carriers.

He made responsible the Sectoral Vice President of Public Works and Services, Néstor Reverol, and the Minister of People’s Power for Transportation, Hipólito Abreu, for the development and implementation of this program.

In this context, he recalled that the Great Mission Transport Venezuela was born with the aim of improving this public service for the Venezuelan people:

In this regard, the first of six Bus-Ambulance units was presented, specialized vehicles that have all the internal equipment necessary to simultaneously attend to up to 16 patients, including up to four of them in critical conditions.

The new drones made in the country were also presented, as well as the adaptation of systems for fumigation with reverse engineering.

In a television contact, the advances of the Oxi-Metalmecánica company located in Carabobo were presented, with the chassis production project for public transport units for trunk routes.

Referring to the commitment of the working class in the transport sector to advance in the development of sustainability projects for the sector, Minister Hipólito Abreu highlighted the recovery of 2,800 Yutong buses by national labor, to meet the needs of the people.

In this sense, two models of vehicles for passenger transport were presented, close to starting their manufacture, small 26 and 32 passenger buses that would be used in the suburban and short interurban routes in the Maracay-Valencia, Caracas-Valencia axis, or on long suburban routes in Bolívar state. Of these units, it is expected to produce a total of 472 buses in the first phase.

Maduro: We must activate the values of solidarity to confront the selfishness

Venezuela and Jamaica sign pre-agreement to modernize refinery in Jamaica

On October 7, the People and Chávez wrote a memorable page in history

NA receives guidelines from the US Southern Command