The Government of the Bolivarian Republic of Venezuela, rejected the statements by the State Department spokesman, Ned Price.

Price demonstrated that his government operates as a machine for the violation of Human Rights and the Global International Law.

The hatred and systematic persecution of the US against Venezuela, had its most recent expression in the kidnapping operation against Ambassador Alex Saab, who helped the Venezuelan people to mitigate the perverse effects of the criminal blockade in vital humanitarian areas.

If the United States justice system were so independent and just, it would prosecute the international crimes committed by Colombia, the world’s leading cocaine producer and third in organized crime, or it would prosecute Juan Guaidó, who benefits from the plundering, dispossession and robbery of the Venezuelan heritage.

The United States made the worst exercise of falsehood and immorality, by pretending to set itself up and speak on behalf of the people, when in reality it is a savage executioner who has massively violated the Human Rights of the Venezuelan people.

Venezuela, the sixth country in Latin America with the greatest biodiversity 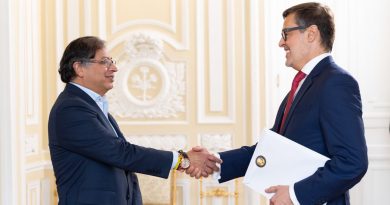 Venezuela ready to improve diplomatic relations with the United Kingdom