President Nicolás Maduro assured this Wednesday that the priority at the dialogue table, which began on August 13 in Mexico, is to improve the economy of Venezuela and recover the assets kidnapped abroad, that belong to the people:

«The priority at the Mexican dialogue table is economic growth, for the assets that belong to the people of Venezuela to be returned, for this money to come to be injected into the veins of the national economy”, he said.

During the productive Wednesday session, the Head of State explained that the Understanding Memorandum for dialogue in Mexico was published in the Official Gazette and is a Law of the Republic: “It means that all the legislative, political and legal support of the country has been given to it«.

In this context, President Maduro asked the president of the National Assembly (AN), Jorge Rodríguez, to bring as a vital point to the dialogue table the lifting of the unilateral coercive actions that have been imposed on Venezuela:

«The national economy can never again be the center of a political and ideological battlefield”, he said.

Similarly, he instructed Executive Vice President Delcy Rodríguez to take the reins of the 16 Engines of the Economic Agenda and apply the methodology for the construction of the new post-rentier oil model. 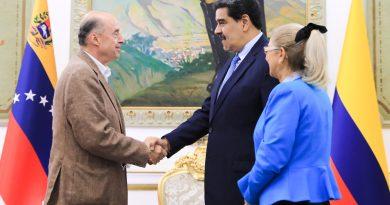 Samper: Commission of Truth and Justice bets on path of dialogue

CNE: 17 political parties in effect for the Presidential elections