The Vice-president for the Economic Area, Tarek El Aissami, emphasized on Monday that the productive apparatus is in the obligation to overcome the unconventional war -perpetrated by right-wing economic sectors- and thus create the necessary conditions to consolidate the nation’s stability:

«We must stop excusing ourselves from the economic war and start building our own destiny. The economic war will always exist as long as there is our firm and unwavering will to be free and independent. It is no longer valid to give excuses for any economic war, we are obliged to overcome it and create conditions for a new stability in all fields», said El Aissami from the Teresa Carreño Theater in Caracas, during the launching of the National Development Plan.

In a joint radio and television broadcast, El Aissami stressed the need to work for a new model of business management -promoted in the Constituent Congress of the Working Class last week- in order to «develop the real productive forces», since Venezuela has the necessary knowledge and all tools to reinvigorate the productive apparatus:

«We have the installed capacity in all fundamental areas for national development (…) We have great potential to make a qualitative leap towards a new diversified, non-rentier model», added El Aissami during the activity headed by the President of the Republic, Nicolás Maduro.

In this regard, he highlighted the work carried out by the National Government with the Program for Economic Recovery, Growth and Prosperity, promoted in August this year after the monetary reconversion process:

«It has been 56 days of the new economic beginning, of our program of economic recovery, growth and prosperity. (It is) Ours, because it has been a collective creation (…) A deeply sovereign program that should lead us to a new productive situation. It is the profound renewal of the Venezuelan path to socialism», he emphasized.

Marcano: Those who have dedicated themselves to destabilize have promised unfeasible things 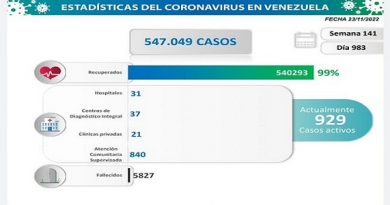 Maduro: We remain in the streets with the same people of Chavez in battle and victory

The CNE acts adjusted to the Constitution