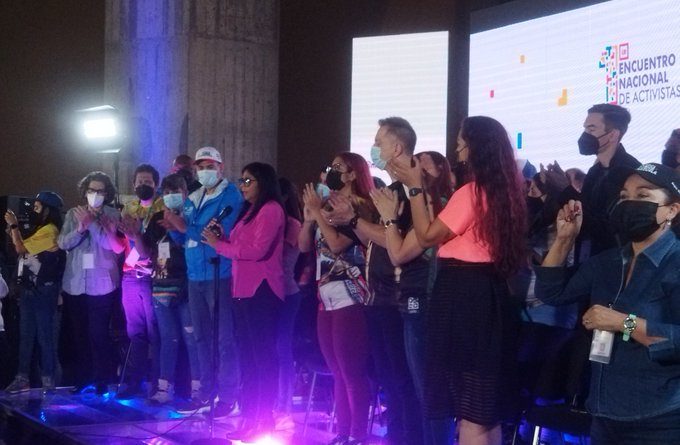 «Without a doubt, Venezuela is recovering, it is on its feet, we are heading towards a new prosperity, without a doubt, Venezuela is going towards a new prosperity as a result of its efforts,» said the President of the Republic, Nicolás Maduro Moros, during a telephone contact with the more than 700 participants in the National Meeting of Activists of the Somos Venezuela (We Are Venezuela) Movement, held this Saturday in the open spaces of the Teresa Carreño Theater in Caracas.

In his message to the participants in this great meeting, the Head of State convened an extended meeting with the national leadership of the Somos Venezuela Movement, «to hear criticism, self-criticism, suggestions, solutions region by region» and depending on the application of the 3R.Nets:

“This meeting has all the approaches that have been collected throughout the country. It was worth it that this movement was born in 2018 and it stings and extends forward, into the future (…) interesting organizational and political approaches, to get organized in 21 networks, it is a movement of popular networks, I’ll wait for you this week to hear all your proposals so that this movement continues its expansion towards the powerful Venezuela, living by living”, he stressed.

Similarly, the national president reiterated that Venezuela and the Venezuelans «Are coming forward«

“As a result of the own effort, work and collective intelligence, Venezuela is coming forward, and without a doubt, it is heading towards prosperity to build a new social welfare state. Let’s prepare for the new”, exhorted the Head of State.

In this context, he urged the activists of Somos Venezuela and the organized people throughout the country, to «take care of the stability and security of Venezuela, the lives of the people, our people have shown that they want to live by living, that they want to live in peace, to thrive, to move forward, we’re going to keep on building.»

For this reason, he urged the People’s power to take care of the electricity service, water, to take care of the economy: «Let no one come to sabotage economic growth, that no one dares to continue with their little war, we are advancing at a good pace”, he emphasized.

Meeting with the people:

For her part, Executive Vice President Delcy Rodríguez thanked President Maduro for her message to the activists of Somos Venezuela who, she assured, remain in the fight «to continue defending the Homeland,» in deep communion with the people:

“We are the tricolor flag, we are Movement in union, along with the Great Patriotic Pole, together with the people (…) We came out to meet the profound people, with the national identity. (…) Here is the people of Venezuela taking their message of great hope to the Venezuelan people”, said Rodríguez.

Previously, while leaving the event installed, Vanessa Montero, General Coordinator of Somos Venezuela, stated that this 1st National Meeting of Activists, aims to develop a plan and plan the organic projection of the Movement, as a political-social movement towards 2024:

“The Somos Venezuela Movement is projected to be the second political force in 2024 in our country, within the process of the Bolivarian Revolution. Therefore, the reason for this meeting and the responsibility and awareness that each one of us must have to achieve the objectives of the Homeland”, she concluded.

To request a foreign intervention constitutes Treason to the Homeland

Venezuela warns that Treasury Department is behind sequestration of resources

Maduro celebrates strengthening of trade relations between Venezuela and Turkey

Jorge Rodríguez: OAS is an organization that is dedicated to assaulting the peoples who decide to be free