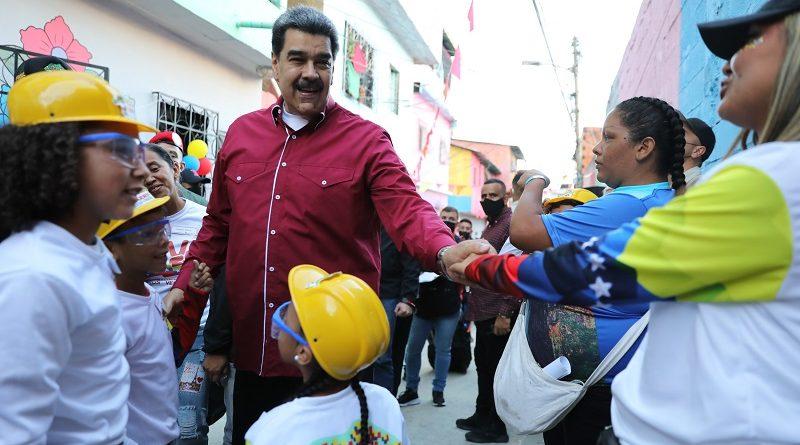 The President of the Republic, Nicolás Maduro, instructed this Wednesday to design a special urban offensive plan to be applied during the next 2023, 2024 and 2025 triennium, aimed at meeting the objective of rehabilitating and redeveloping all the country’s neighborhoods through the Gran Misión Barrio Nuevo Barrio Tricolor, (Great Mission New Neighborhood, Tricolor neighborhood – GMBNBT).

This was announced from the Los Sin Techos sector, Santa Rosalía parish in Caracas, where the Head of State participated in the celebration of the 9th Anniversary of the Gran Misión Barrio Nuevo Barrio Tricolor.

“We are preparing a plan of total offensive for the repair of all the neighborhoods of the country, in a superior phase (…) We must strengthen the people’s power and the communal councils, strengthen the foundation of communes and prepare for a new phase of rebirth, strengthening of the GMBNBT”, he said.

In this context, the Head of State reiterated that Venezuela is experiencing a unique moment of rebirth and is projected as an example of political stability, economic recovery and the fight against inequality and for social justice.

«Venezuela is an example of a popular Revolution, of a civic-military union,» he affirmed.

The National President announced that in the next few days he will deliver the 4 million 300 thousand house of the Great Mission Housing Venezuela (GMVV).

“These are works that reach the community, specific communities, because the GMBNBT is a great mission to protect the people, to make the neighborhoods beautiful, functional, we have done a lot, the people have not been orphans, with blockades, with sanctions, threats We have never left the family alone, we have been by your side,» said Maduro.

Since its creation in 2013, the Gran Misión Barrio Nuevo Barrio Tricolor, whose objective has been to beautify the communities of the country to improve the quality of life of the population, has managed to rehabilitate 2,010,307 homes, which represents 2,211,337 families benefited.

As of November, 189,517 homes have been rehabilitated, benefiting 208,468 families, making it possible to pave the way for profound transformation to rejuvenate the country’s communities and guarantee the living of the Venezuelan people.

Maduro: I act out of love to my Homeland, I will not leave you alone

Head of State ordered the FANB to protect public services

Whoever may fall! Head of State requested support from workers to defeat corruption