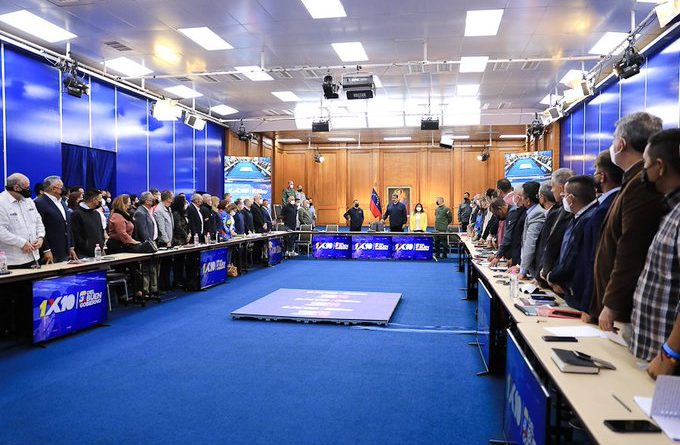 During his participation in a working day of the 1×10 of Good Governance, with the National Directorate of the PSUV, Governors and Mayors of the country’s capital cities, President Nicolás Maduro emphasized that «the 1×10 is the tomb of bureaucratism», and assured that the new government management technology system «has started on a safe foot», four days after its launch.

From Miraflores Palace in Caracas, the Head of State pointed out that the 1×10 of Good Governance «connects us directly to the problems of the people» by turning a specific need of the communities into a right that gets immediate attention.

«We have entered the new era of transition to socialism (…) With the 1×10 bureaucrats, managers and frauds are finished because we go directly to the attention of the people, of the real problems”, he emphasized during this work roundtable.

In this order of ideas, President Maduro urged the people to formulate their reports through the VenApp application, an instrument «that was born fulfilling a social function so that the people can make their denounces and proposals”.

Similarly, he called on the Bolívar–Chávez Battle Units (UBCh) to join the registration of the 1×10 of Good Governance to build the Concrete Action Agenda (ACA) through the Patria platform, which has an exclusive section for the 1×10 load:

«If the 1×10 has been effective in winning elections, mobilizing the people and confronting fascism, it has to be effective to govern”, he stressed.

It is worth remembering that the 1×10 of Good Governance will focus its efforts, in this first pilot stage that will last 60 days, in three priority areas: water, health and education. However, President Maduro pointed out that all denounces will receive immediate attention and response.

Nicolás Maduro: We started the year working for our Homeland, with love and optimism

Ameliach: Recall referendum will be the MUD's last deceit

Venezuela and Dominica strengthen ties of cooperation and integration

Venezuela is in absolute peace and tranquility