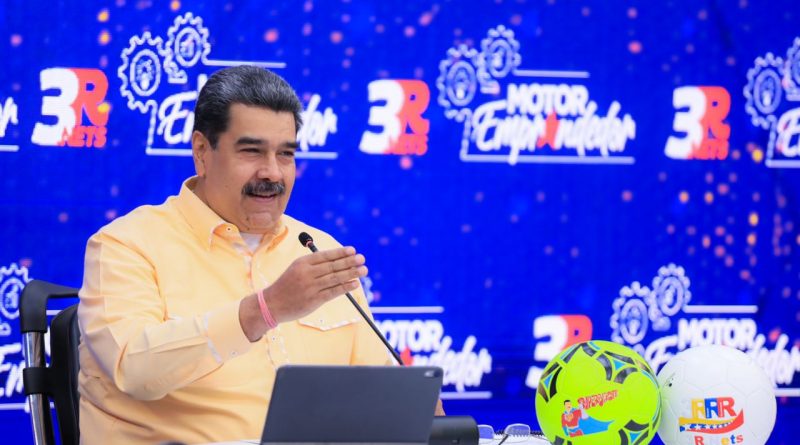 Within the framework of a new Productive Wednesday journey, the president of the Bolivarian Republic of Venezuela, Nicolás Maduro, reported that a total of 202,609 new entrepreneurial projects have been registered in the Ministry of People’s Power for Economy, Finance and Foreign Trade.

During his participation in this conference, he explained that, of these initiatives, «we have already characterized 83,401 projects to fully support them with the 4F formula, (to) formalize them, finance them and fully support them”.

The Head of State stressed that they are already prepared, “through the National Financing Fund, to provide comprehensive support to all entrepreneurs» who are in «the Capital region, the Llanos (plains) region, the Central region of the country, the Western region, the Eastern region, in the Andes, in the Guayana region and in the Insular region”, he detailed.

Impulse to the Entrepreneurship Engine:

As part of the initiatives aimed at promoting Motor Entrepreneurship, within the framework of the Bolivarian Economic Agenda, President Nicolás Maduro simultaneously delivered 678 financings to Venezuelan entrepreneurs throughout the country.

In this context, Executive Vice President Delcy Rodríguez explained that a total of 10,000 certificates from the National Entrepreneurship Registry have been delivered:

«There are 10,000 entrepreneurs who can go to any office of the national, state and municipal public administration, identified with their QR and they can now do all kinds of paperwork necessary for their ventures”, she stressed.

In this regard, President Nicolás Maduro highlighted the conscience and creativity of the Venezuelan people who did not surrender to those traitors who sought to undermine the economy.

He assured that thanks to the contribution of Venezuelan entrepreneurs, the nation is heading towards economic recovery, despite the illegal sanctions to which it has been subjected by the United States government:

«Venezuela has bravely, consciously and creatively endured an economic aggression by North American imperialism that is unique in history”, he pointed out.

Likewise, the Minister of People’s Power for National Trade, Dheliz Álvarez, announced that the country’s main commercial chains expressed their willingness to locate spaces to exhibit and offer the public the products developed by the country’s entrepreneurs.

He indicated that this initiative is guaranteed in coordination with the private sector “and we, under instructions of Vice President Delcy Rodríguez, have been holding physical fairs (in order to) achieve this chain, shorten distribution chains that seriously impact prices, above all, the logistics chain.

Previously, President Nicolás Maduro reported that the Bolivarian Government has “asked the National Association of Supermarkets to grant us and open a large and special space for all entrepreneurs to place their products and sell them online and in supermarket chains. from all the cities and towns of the country, we are waiting for the practical answer on how we are going to do it, because they have already given us the go-ahead”.

President of ANC: The only transition in Venezuela is to go to Bolivarian socialism

TSJ declares as Constitutional State of Exception and Economic Emergency

President Maduro will not attend Summit of the Americas

Cabello: We cannot let be changed the true story of Commander Chavez