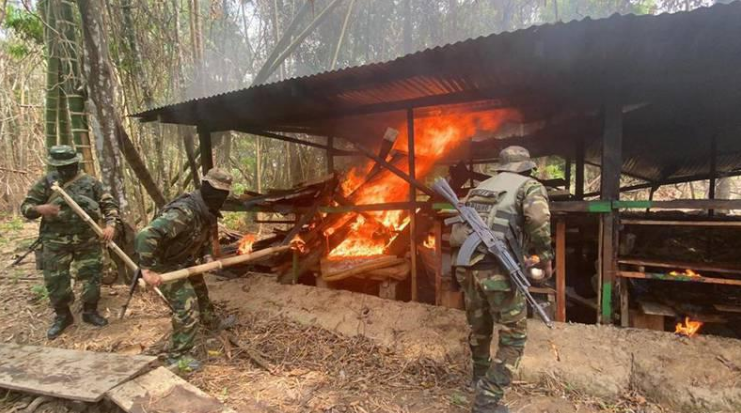 The Operational Strategic Commander of the Bolivarian National Armed Force G/J, Domingo Hernández Lárez, shared on Monday a video on Twitter with details of the operation.

In the micro, Colonel Jhorman Pinto Rosales, a FANB explosives expert, explains that were seized new explosive devices consisting of 25, 13, 20 and 32 kg gas cylinders with an electric initiator each.

Likewise, a cylinder used by the Tancols to make a type of mortar was detected.

Members of the Explosive Engineering Unit of the FANB made the corresponding deactivation.

This operation was carried out as part of the Operation Bolivarian Shield 2022 – Vuelvan Caras, deployed in the plains entity with a large contingent of military personnel from all the components of the FANB, including the Bolivarian Militia, for the expulsion of the Tancols out of the nation.

This Monday, Hernández Lárez reaffirmed on Twitter: “The FANB continues to dismantle invading terrorist groups in our territory, who murder our people and traffic drugs across our borders! The law is harsh but it is the law!».

And in another message, he published: “In the middle of Venezuelan territory, another Colombian drug-trafficking terrorist camp full of their materials of death and destruction, all coming from and manufactured in Colombia! These are not Venezuelan customs! Being able to move around our territory is an inalienable right of the Venezuelan people, but this right has been truncated by Colombian drug traffickers who have entrenched themselves in our thickets filling them with explosives! FANB will not negotiate sovereignty they will all be expelled!”

Rodriguez: Censure of NA against minister for Alimentation is illegal and unenforceable

The real threat to Venezuela is represented by Colombia

Covid-19: 39 community and 128 imported cases were reported this Sunday in Venezuela