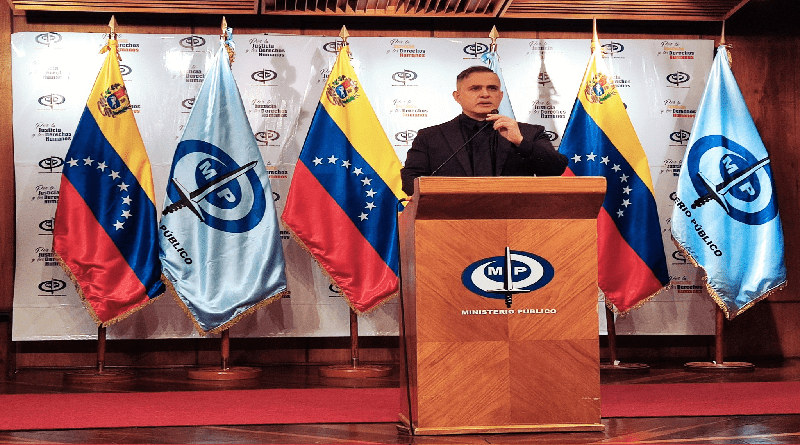 With the support of members of the Bolivarian National Guard (GNB), the Special Operations Air Group together with the Public Ministry (MP) managed to detect and destroy an illicit camp for the production of drugs and a crop in the Jesús María Semprún municipality of Zulia state with 17 hectares of coca bushes.

This was reported by the Attorney General of the Republic, Tarek William Saab, in statements this Thursday at the Public Ministry, Caracas, an occasion on which he specified that at the camp were found 4,710 kg of coca paste, 90 liters of chemicals and 1,100 liters of fuel, which were incinerated, while in the field 187,000 coca bushes were eradicated.

Saab highlighted that in another operation carried out on February 8, in the same municipality, a 14-hectare field with a total of approximately 154,000 coca plants was eradicated:

“In total, 341,000 plants distributed over 31 hectares were eradicated (…) We are sure that the intentions that are intended in Colombia will not materialize in Venezuela,” he indicated.

He specified that there is no evidence that these actions are linked to the drug trafficking network that operated with public officials with immunity to transport drugs from Zulia to various states of the country. He noted that investigations are still continuing in this case.

He added that 115 wrappers of block-type cocaine were recently seized at the Virgen del Valle farm, located in the town of Cumarebo, owned by Aquiles Hurtado: “We have a concentrated focus on Zulia, Falcón, and some eastern states to continue dismantling these mafias whose central directorate is in Colombia,” he said.

Some 490 kg of cocaine, 7 small guns, 4 long guns, 635 ammunition, as well as gasoline and explosives, have been seized in the drug trafficking network, and 21 people have been deprived of their liberty, including some public officials.

12.1 million workers are impacted by wage increase of 30%

This Tuesday installs the new National Assembly with Chavista majority

Against the media war! Maduro: We are bringing to the world the truth about Venezuela