This Sunday, President Nicolás Maduro affirmed that the Venezuelan diplomat Alex Saab, a victim of kidnapping by the United States government, has the support of the entire Venezuelan people and the social movements of the world, who believe and defend the truth as maximum response to the systematic violations that US imperialism has used against the Venezuelan diplomat:

Solidarity for the truth:

In this context, he highlighted the importance of raising one’s voice and denouncing the persecution and aggression against the Venezuelan diplomat tortured and deprived of all his human rights for 491 days in Cape Verde, as well as now his kidnapping by the government of the United States:

«With the word of God and the word of the peoples, we must raise a powerful movement of solidarity for the truth, justice and freedom of Alex Saab in Venezuela and throughout the world”, he said.

By confirming that in the face of this serious violation of the rights of one of the members of the Venezuelan commission before the dialogue table, he gave the order to suspend participation in the round of talks that began this Sunday in Mexico.

He explained that the US Government knew that with the kidnapping of Saab “it was stabbing the dialogue table. They don’t want a dialogue. But, with or without empire, Venezuela will continue coming forward”, he said.

He recalled that Alex Saab was key to saving the lives of millions of Venezuelans, thanks to the food, medicine and fuel that he managed to bring to the country during the tightening of the economic blockade.

Maduro detailed the tortures to which the Venezuelan representative was subjected in order to physically and morally break him, and after being besieged in isolated house arrest by more than 100 armed soldiers, he was kidnapped this Saturday «by blows”.

“They took him yesterday, they went over everything. They beat him out and took him away without notifying the lawyers, relatives, and anyone else. A kidnapping on the entire line”, he warned.

He also denounced that Saab’s daughters and wife were not allowed to visit him, «they were declared persona non grata, and now they have him kidnapped in the state of Florida.»

He announced that Venezuela will exercise all legal means to enforce justice and achieve the release of diplomat Alex Saab. 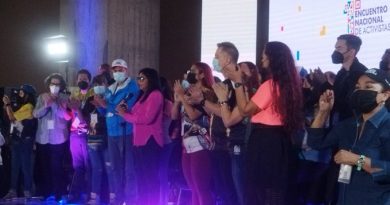 President Maduro: Venezuela is recovering and we are headed for a new prosperity

COVID: Venezuela registers a rate of 92% of recovered cases

The ANC aims to become a great popular assembly

Head of State instructed action lines to communicators to the homeland