This Monday the official delegation of the Inter-Parliamentary Union (IPU), led by its president, Duarte Pacheco, arrives in the country to hold a meeting with authorities of the Legislative Branch, including its president, deputy Jorge Rodríguez and its first vice president, Iris Varela.

The IPU delegates will develop an intense work agenda, between August 23 and 27, following the invitation made by the president of the National Assembly (AN), during his visit to the IPU headquarters in Geneva last April.

The activities of the IPU delegation will begin this Monday with the official reception of its president, Duarte Pacheco, scheduled for 10:30 am along with the rest of the delegation, to hold meetings with the Venezuelan group before the IPU, in addition to the Special Commission for Dialogue, Peace and Reconciliation of the AN.

The Inter-Parliamentary Union (IPU) is the only organization that represents the legislative branch on a global scale, and aims to foster cooperation between its 179 national member parliaments and 13 regional bodies.

It is also expected for the distinguished visitors to meet with the parliamentary benches and representatives of the Public Powers of the country, including the National Electoral Council (CNE) and the Moral Power.

The truth of Venezuela:

It is worth noting that the visit of the president of the AN, Jorge Rodríguez, to Geneva on April 11, accompanied by deputies from the Homeland Bloc and the opposition bench, took place after the installation on January 5 of the new AN, in order to strengthen relations at the parliamentary level.

At the time, Rodríguez pointed out that the meeting sought to publicize «the truth of Venezuela beyond the media and the cunning attacks» against the Bolivarian nation.

«We have extended an invitation for a delegation from the IPU Executive Committee to visit our country and know the truth of Venezuela (…), and learn about the work for peace and reconciliation that the new AN has undertaken”, he stressed at that time.

Duarte Pacheco is a member of the Social Democratic Party of Portugal, a center-right organization, while Juan Letelier represents at the IPU the Chilean center-left movement, the Socialist Party of Chile.

Samuel Cogolati, of Belgian origin, represents the Ecolo Party of Belgium (Ecologist Party) and the former Minister of Foreign Affairs of Benin from 2011 to 2015, Nassirou Bako, is from the Amana Alliance Party.

Attorney: Protective action against the AN seeks to avoid violence

CICPC shows the other side of scientific research: Expo Criminalistics 2018

Reverol: Crime rates decrease by more than 27% throughout the country 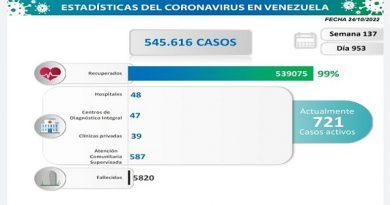 Conspiracy plan against Venezuela was directed from the United States

Villegas warned at Unesco about threats of US intervention in Venezuela