The constitutional president of the Bolivarian Republic of Venezuela, Nicolás Maduro Moros, proposed to establish a process of dialogue with the government of the United States from the dialogue table that takes place in Mexico:

«We are going to propose, at the Mexican table, the opening of a direct dialogue with the United States’s government to attend all bilateral issues,» said the Head of State this Monday from Miraflores Palace in Caracas.

In this regard, the national president reiterated that Venezuela has always expressed its willingness to dialogue with the United States, and urged to put aside arrogance, hatred and contempt to be able to take a first step, which could be the return of the charge d’ affaires to their respective positions:

President Nicolás Maduro stressed that this proposal is related to the fact that the opposition sector represented in the unitary platform, who are at the dialogue table in Mexico, is aligned with the sanctions applied by the United States against the people of Venezuela.

In this sense, he stressed that the unilateral coercive measures imposed by the United States have caused damages to the Venezuelan population and therefore, the Bolivarian Government will not cease in its request that they be lifted.

When asked about the unfolding events in Afghanistan, President Maduro pointed out that this unfortunate situation shows that the interventionist and warmongering policy of the empire in the world has failed:

“It is what has been made evident. The United States withdraws from Afghanistan 20 years after its military occupation, leaving a country in a civil war. It’s terrible! It is what they have wanted (to do) with Venezuela (…) they must draw very clear conclusions regarding their threats to other regions of the world”, he affirmed.

Referring to the statement by the US Secretary of State, Antony Blinken, in which he threatened to impose sanctions on the Afghan country, the Venezuelan Head of State questioned: “Are not enough the dead, the civil war, terrorism, the wounded, the pain, the chaos and the desperation of Afghanistan, to continue threatening with sanctions?”

«We hope the people of Afghanistan finds its way sooner rather than later, and that the problems of Afghanistan will be solved by the Afghans in peace, in dialogue, without intervention from anyone”, he said. 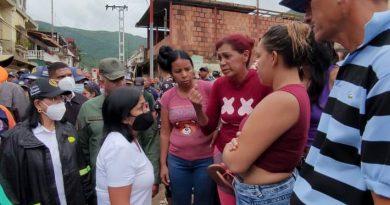 Maduro meets with representatives of the Development Bank of Latin America

Venezuela congratulates Antigua and Barbuda for their 35 years of independence

China will provide support to the Recovery, Growth and Economic Prosperity Program