From the Cuartel de la Montaña 4F (4F Mountain Barracks), located in Caracas, the President of the Republic, Nicolás Maduro, led the central act for the 12th anniversary of the Bolivarian Militia and National Dignity Day during which 33,995 were promoted to sergeants and 933 to officers, who will shield the machinery made up of more than 4,500,000 militiamen:

During this historic journey, President Nicolás Maduro, in his capacity as Commander-in-Chief of the FANB, granted the post-mortem promotion to the rank of Admiral to Hernán Grüber Odremán, who was part of the group of patriots who on November 27, 1992 headed the second insurrection against the administration of Carlos Andrés Pérez.

«The Bolivarian Militia is the largest shield that Venezuela has to defend itself from the aggressions of imperialism, the Colombian oligarchy and to maintain peace, sovereignty, stability and independence,» he asserted.

To sow the historical memory of Venezuela:

In this sense, he instructed the rector of the Bolivarian Military University of Venezuela, UMBV, M / G Félix Osorio, to develop special plans aimed at “sowing awareness and values” through the reconstruction of the history of Venezuela.

“We are in a historical time where we have to sow memory, sow awareness and reap the future. Whoever sows memory, cultivates homeland, who sows persevering values ​​is capable of reaping the great harvest of national consciousness in the future”, he emphasized.

Cabello responded to possible US sanctions on gold exports from Venezuela 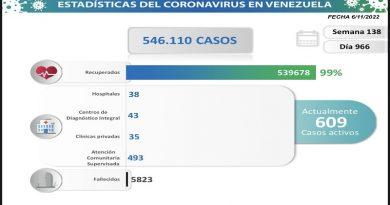 Opposition governors subordinate to the ANC

Maduro recalls bravery of fighters of the Admirable Campaign

Venezuela begins a new stage in the communications revolution

Delcy Rodríguez welcome the athletes who shone in Tokyo

Venezuela, Cuba and Nicaragua are facing a "new onslaught" from the United States