This Tuesday, the Legislative Program for Change «Economic Proposal» was installed in Plaza Bolívar, Caracas. With the aim of debating proposals for laws, which will then be taken to the new National Assembly for consultation.

In this sense, Víctor Clark, leader of the United Socialist Party of Venezuela (PSUV), highlighted the importance of this initiative, ahead of the parliamentary elections on December 6.

“Today we installed this space to contribute to the Legislative Program for Change. We need to know and make known to our people what we are going to do in this National Assembly, what is the task that corresponds to the National Assembly to seek short-term solutions in the economic field, in the social field, in the field of public services,” Clark said.

It is contemplated that this popular debate program will be spread throughout the national territory, in order to discuss laws such as: The Law of the Care System; Gas Law; Communal Cities Law, among others.

For his part, the candidate by list vote, Jesús Farías, pointed out that the Bolivarian revolution has a well-defined Project, of Bolivarian Socialism of the 21st century, which marks and will mark the route of actions and that are executed in the country.

«An election of this nature is not only the deputy for the votes and support for some candidates in particular, it is also a debate and a battle of ideas, approaches, programs, in this case legislative, and we as Chavistas, as revolutionaries, have a government program, a historical program such as the Homeland Plan”, expressed Farías

Likewise, he stated that the new parliament must generate concrete proposals that contribute to the recovery of the national economy, in order to counteract the economic blockade that currently exists against the Venezuelan people.

«At the present time the economic issue plays a crucial role. We see the country, we have made a diagnosis, an analysis of our international context, and the economy appears as the central element, the most important, the one with the greatest impact on the daily life of our people, ”said Farías. 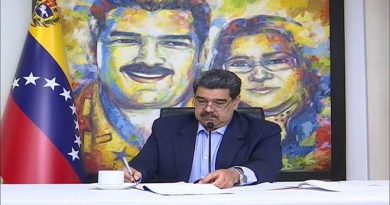 President Maduro: Our work will set a precedent in the construction of the Homeland

Menéndez: «There is no other option to face the war than to strengthen internal production»

General García Carneiro has passed away

Venezuela thanks support of Russia and Cuba to combat the pandemic