Venezuela registers 380 new cases of Covid-19 in the last 24 hours, of which 331 are of community transmission and 49 cases are imported , as informed the Minister for Communication and Information, Freddy Ñañez.

Through his account on the Instagram social network @LuchaAlmada15, he pointed out that Carabobo state is the entity with the highest number of infections, in 11 of its 14 affected municipalities: Valencia 29, Montalbán 11, Puerto Cabello 9, Guacara 8, San Diego 7 , Libertador 7, Bejuma 3, Los Guayos 3, Naguanagua 1, San Joaquín 1, Juan José Mora 1.

He stressed that to date 92,705 cases have been confirmed, of which 87,547 people have been recovered, which represents a recovery rate of 94% of infections.

About the 4,353 active cases, he highlighted that 4,300 are being treated in the public health system and only 33 in private clinics.

He also regretted the sensitive death of 5 Venezuelans: two women aged 81 and 62 years in Mérida, two men aged 65 and 41 years in Táchira and a 41 year old man in Guárico: «Our condolences to their relatives and close ones”, emphasized the minister.

In Venezuela 2,149,549 tests have been carried out to date, which represents 71,652 tests per million inhabitants.

«This Monday began a new week of flexibility, under the Venezuelan method 7 + 7 plus with more than 50 productive sectors activated throughout the national territory. The call is for the entire Venezuelan population to respect biosecurity measures to avoid new cases and maintain, in the same way, the flattening of the contagion curve”, concluded Ñañez. 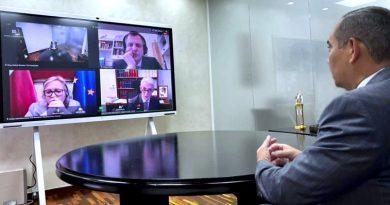 President of TSJ participated in opening of ICC judicial year

Ministry of food evaluates actions against new US coercive measures

President of TSJ received report on parliamentary elections of DEC-6