The President of the Bolivarian Republic of Venezuela, Nicolás Maduro, intervened this Wednesday in the high-level debate of the 75th session of the General Assembly of the United Nations (UN), in which he assured that Venezuela has more than 30 billion dollars have been snatched, frozen and kidnapped in accounts in the United States and Europe, just as they persecute companies and the Government that commercialize any good or service in the country, be it food, medicine, fuel, additives necessary to produce gasoline, among others.

Given this, the National President ratified to the world that Venezuela has prepared to resist and continue to resist the offensive of criminal and inhuman aggression. “Venezuela has prepared to overcome this blockade of the United States, it is a battle for peace, for the homeland, for the region, for humanity, where our heroic people have assumed, as in the past, their historical role in the face of the ignominy of the most dangerous empire in universal history”, he said.

In this sense, the Head of State thanked the Secretary General of the United Nations (UN) António Guterres and the High Commissioner for Human Rights, Michelle Bachelet for the pronouncements demanding the immediate lifting of the coercive and unilateral measures that not only are they contrary to the Charter of the United Nations, but they are obvious obstacles imposed on the affected countries to face the COVID-19 pandemic and the fulfillment of the country’s social development objectives.

Incursion of terrorist mercenaries financed by the US:

He recalled that on May 3, 2020, he faced an attempt and a maritime incursion by a group of mercenaries and terrorists, financed by the United States Government and trained in Colombian territory with the absolute support of both governments, which were captured in real time by the civic-military-police union and are at the orders of the judicial institutions for due process.

He also announced that they recently captured an American spy with war weapons and documents relating to the oil and electricity industry. «It is a daily siege that we have been facing, dismantling, denouncing and unmasking”, he stressed.

He insisted on the need to vindicate the principles of respect for sovereignty, for the self-determination of peoples, expressed in the Charter of the United Nations that unites them all as peoples, whose illegal violation by some UN member states, it is endangering the stability of the country and the Latin Caribbean region.

He called on the peace defending countries to activate and make the US Government understand that in the midst of a global pandemic, no one understands and no one can explain that there is a resurgence in the persecution of criminal blockade. against noble countries such as Cuba, Nicaragua, Venezuela, Syria and other brotherly countries of the world.

He demanded once again the cessation of the coercive and unilateral measures of all the alleged sanctions, and let the peoples exercise their own rights to development and to the country: «The United States in the course of history has become the most significant threat to global peace in this world”, he warned.

Return of Venezuelan Nationals from other Latin American countries:

On the other hand, he pointed out that Venezuela faces and is experiencing a wave of massive voluntary returns of thousands of Venezuelan migrants from countries with very high levels of COVID-19 infections such as Colombia, Ecuador, Peru, Chile and Brazil.

He added that the return of Venezuelans has been for various reasons and one of them has been the failure of those countries to deal with COVID-19, the systematic violation of human rights, anachronistic and xenophobic policies, even from high spheres of Government, discrimination, mistreatment, lack of socio-economic conditions, semi-slavery situation, human trafficking, calamities that Venezuelan migrants have suffered in clear violation of their human dignity.

Given this, he stressed that the fragility of the social protection systems of these countries has been evident, while affirming that despite the enormous amounts of dollars that have been granted to these governments for Venezuelan migrants, and therefore the Head of State exhorted for a rigorous institutional and scientific review of the role that some United Nations agencies such as UNHCR and the International Organization for Emigration (IOM) have been playing.

Rodriguez: Venezuelan Government System is constitutionally a Presidential one 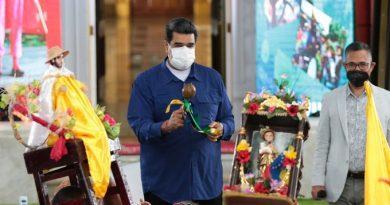 President Nicolás Maduro held meeting with cultors from all over Venezuela

ANC is a space for the defense of the Bolivarian Revolution

PARLASUR expresses support for the dialogue promoted by the Venezuelan Government

60 countries condemned US interference in the Proclaim of Caracas

Number of involved in frustrated assassination increases to 34