The country’s health authorities have detected in the last 24 hours, 669 cases of community transmission and 30 imported cases, for a total of 699 new infections in this journey of screening for the new coronavirus, as reported the Executive Vice President, Delcy Rodríguez.

Regarding the foreign cases, she wrote in the aforementioned social network that all 30 were coming from Colombia, the second pandemic epicenter in the region, only after Brazil.

The vice president reiterated «One of the strategies that has given great results in Venezuela is the application of house-by-house tests», before which up to date have been carried out for the early detection of Covid-19 1,678,639 tests, which represents 55,955 tests per million inhabitants.

«We continue to work tirelessly to protect the health of our people, complying with the instructions of President Nicolás Maduro, who has been on the front line in the search for treatments to save lives and overcome this pandemic», she said. 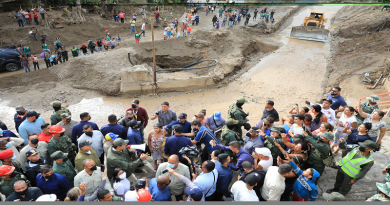 Economic aggressions are as lethal as imperial armies

Rodriguez called on Venezuelans not to succumb to calls for violence

Chancellor: Government of Colombia protects corruption and crime in Venezuela

President Maduro: 2018 will be a year of hope and consolidation of the Revolution