This Wednesday was installed the 1st National Social Security Congress 2019 «Perspectives in Venezuela around 2025» with the purpose of showing the world the progress made by the Bolivarian Government and the challenges of the right to social security within the framework of the thought of our Liberator Simon Bolivar.
From the Bicentennial Hall of the Venetur Alba Caracas Hotel, the Sectorial Vice President for Social and Territorial Development Aristóbulo Istúriz, indicated that a balance of social security is important to evaluate the Constitution and its application: «which reflects, not the country that we have, but it reflects the country we want to have. And it is from the Government that the country is going to be built with the people, that is why when we define the State in the Bolivarian Constitution we say that it is a State of right of justice, because it symbolizes that it is the same rule of the game for the whole world. The Bolivarian Revolution implies changes, implies transformation, implies progress towards equality and the evaluation of social security».
Istúriz stressed that in this country everyone has the right to work and today unemployment is between 6 and 7 percent, however, despite the impact of the economic war «today we have a great advance in employment and our Constitution contemplates that social security is universal and shows that we have more than 4 and a half million pensioners and every week we increase that amount, it is progressive and it is that from the housewife to the fisherman get their pension paid».
In the same way, the holder of the sectoral portfolio for Social and Territorial Development, said that the Labor Law in an extraordinary conquest of the Bolivarian Revolution and is only possible in Revolution, so this Congress will serve us to make a balance where the impact of the war and the economic blockades must be incorporated to know how this impacts the workers:
«Here are two models and the path we must follow is the path of the Revolution, that is the path that the worker has against capitalism, it is not a secret that today we have more formal than informal employment and that the achievements we have obtained are important. This Social Security Congress, the first in 20 years of Revolution, allows in its balance and conclusions to confront the two models to put them in evidence and also clearly specify how far the economic war has impacted», he emphasized. 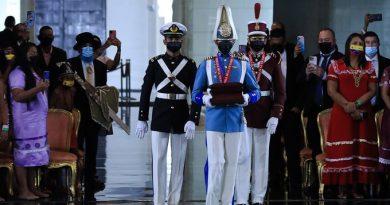 Venezuela must become an energy superpower

Maduro: A year ago the strength of the civic-military-police union prevented a bloodbath

Venezuela categorically rejects statements by spokesman of the US State Department

@NicolásMaduro: For years, migrants have found in Venezuela a country that has sheltered them