Constitutionalist lawyer Hermann Escarrá, president of the Constitutional Commission of the National Constituent Assembly (ANC), urged to deepen judicial measures to order the arrest warrant «against those who clearly, publicly and notoriously wanted to break the constitutional character of the nation», he said.
In an interview offered for the State-owned TV station Venezolana De Television (VTV), he argued that the Citizen Power through the Republican Moral Council must make pronouncements on the progress of investigations in process, «on the evidence of corruption pacts that those involved have with the United States. »
The constituent argued that they believe that next Tuesday in the middle of a session of the ANC this issue will be discussed and decisions will be taken with constituent agreements based on governance in peace, international treaties, rule of law and constitutional guarantees.
He noted that the issuing of arrest warrants correspond to the Judiciary and the Public Ministry.
He denounced that the coup acts promoted by the Venezuelan right wing, on April 30, demonstrated «a tragicomedy, they have no basis, there was a plan that did not got the support, neither of the people nor from the Bolivarian National Armed Forces (FANB)».
It should be noted that this coup attempt, which was thwarted by the National Government, was sponsored by the deputy to the National Assembly in contempt since 2015 Juan Guaidó and the opposition Leopoldo López, (who is currently a fugitive from justice ), who directed destabilizing actions in the Altamira distributor of the Francisco Fajardo highway in Caracas.
Based on these facts, Escarrá said that «what we saw that morning were two ghosts with a desperate behavior and attitude destined to achieve the final rupture of the constitutional body and depose the President of the Republic, Nicolás Maduro.»
Regarding article 187 in its numeral 11 of the Venezuelan Constitution that refers «Authorize the use of Venezuelan military missions abroad or foreign in the country», Escarra said that the interpretation of the rule to be made as a whole, ie «When it is going to be authorized there must be a pre-existing fact and whoever corresponds to this decision is whoever has the pertinent military powers, which is of the constitutional President, and that is Maduro.»
He indicated that this action taken by a sector of the opposition is a propaganda campaign to confuse the Venezuelans.

Pres. Maduro: A smear campaign has been launched against the CNE

In 2020, Conviasa increased its operations by more than 85%

Senator Navarro highlighted participation of Venezuelans on MAY-20 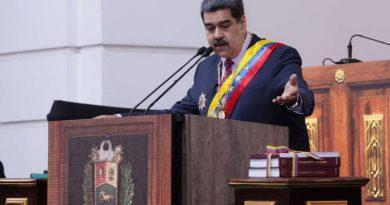 The plan of the Colombian narco-oligarchy failed in Venezuela