The President of the Bolivarian Republic of Venezuela, Nicolas Maduro, said that the United States’ onslaught on Venezuela is due to their interest in the vast oil, gas and mineral wealth.

Venezuela «is the victim of an international aggression that has its national chapter with an opposition subordinated to an interventionist plan, with the aim of bringing chaos to Venezuela», added the President during an interview given to Radio Rebelde of Argentina, on Saturday.

He emphasized that what is currently experiencing the Homeland of Bolivar is a brutal attack never seen before during the 18 years of the Bolivarian Revolution, and insisted that the South American nation and its people will never bow before any empire.

«The United States gave the orders of an onslaught for the overthrow of the Revolution and the Bolivarian Government of Venezuela», he denounced, detailing that the formulas applied to the country are linked to those employed to the popular unity of President-martyr Salvador Allende in Chile on the economic issue, as well as the formulas used in Ukraine to detain the society and subdue it through violence, with organized groups.

«We have had to endure 120 days of a campaign and permanent siege with internal violence that has resulted in hundreds of victims», said the Head of State, referring to the national right wing alliance with the US empire in its goal to achieve their own interests.

«Here in Venezuela there is an intolerant right wing, and they intend to show a good face,» he said, adding that the Venezuelan opposition has had and has all the guarantees of political participation, and a sample of it, he said, are the elections of last December 2015, where that very same opposition reached the majority of votes in the legislative power.

«Despite that, they took the path of violence and of overthrowing of the legitimate Government, of obstructing the social life of the country», he said.

In that sense, he pointed out that it was these actions of the opposition that led him, as President of the Republic and in accordance with the articles of the Constitution, to call on May 1 for the Originary Constituent power of a National Constituent Assembly.

«It was what happened last Sunday, an electoral celebration, which has been like a balm for the social and political life. The constituent has opened the doors of a new stage (…) We are defending, with a lot of rebelliousness, courage and much love, a historical project», he reaffirmed. 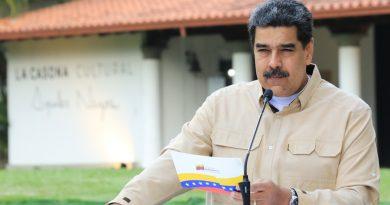 Nobody is going to stop us! Oil workers must be prepared against imperial threats

President Maduro points to US official as involved in conspiracy plan