«Never in the history of Venezuela will we find some leaders as sold out to the imperial interests as the current opposition leadership, who creep before the Southern Command in order for them to invade our nation, builders of a psychological war for the victims to open their arms to their executioners».

The statement was made by Francisco Ameliach, a candidate for the National Constituent Assembly (ANC), during the «Hablando de Poder» (Speaking of Power) program, broadcast by RNV Central Region, in which he stressed that not responding to President Nicolás Maduro’s call for elections is to seek for a Civil war in the country.

In his participation, Ameliach referred to the four fundamental points that will defend the chosen revolutionary candidates once installed the democratic mechanism.

«We must go to the Constituent Assembly to preserve the peace of the Republic with a coexistence agreement that prevents the generalization of a culture of hatred among Venezuelans, prevent the right from executing their plan to exterminate Chavismo, protect the achievements of the Revolution and preserve the sovereignty of Venezuela», said the Socialist leader.

Regarding the call made by opposition leaders to create clashes to prevent people from participating in the electoral journey to be held on July 30, Ameliach called on the Hugo Chavez Battle Units (UBCh) to remain in Permanent session to avoid violence on that day.

«We are betting on the future of the nation, we must do analysis and face it peacefully,» he said.

Installed Bicentennial Congress of the Peoples of the World

TO DEBATE! Plenaries of the 2nd Venezuelan Congress of Women will start this Wednesday 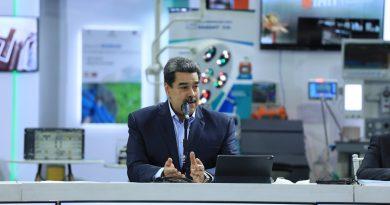 President Maduro: «Venezuela walks the path of growth and greatness»

EU informed CNE that will send exploratory mission to Venezuela

Chancellor Arreaza: Despite the siege Venezuela undertook an economic plan that has broken paradigms

FANB will guarantee right to vote