The deputy for the Parliamentary Bloc of the Homeland, Nora Delgado, on Thursday urged right-wing parliamentarian Henry Ramos Allup, who legally holds the Presidency of the legislative board, to comply with the formal disincorporation of the three candidates from Amazonas state, who were sworn in on January 6, 2016, ignoring the judgments of the Electoral Chamber of the Supreme Court of Justice.

«Come and call for the session that allows the National Assembly to enter into constitutional compliance. The only one that can put the Assembly in compliance is the President of 2016, Ramos Allup, because he is responsible, along with the MUD gang, to put this institution back to the Constitution and to the people. »

Delgado recalled that until the 2016 board of directors is restored and the contempt to the judiciary Power ceases, the board of the current period lacks any validity, and therefore Julio Borges is nothing more than a director of debates.

She reiterated that all the acts being held in the National Assembly are null and illegal, and therefore «we will not continue to waste time in a space that has not served the people at all.»

President Maduro: Opening of pedestrian crossing on the border has been a complete success

Nobody surrenders in here! Maduro: We will keep transiting the independence path 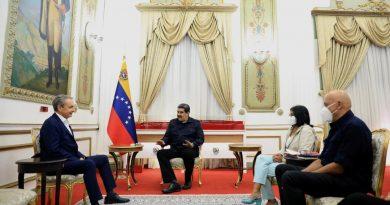 Maduro: Reinforcement of vaccination against COVID-19 will begin in January

Caracas and Miranda to radical quarantine starting this Wednesday