The President of the Bolivarian Republic of Venezuela, Nicolás Maduro, stressed this Wednesday that the countries that make up the Organization of Petroleum Exporting Countries (OPEC) are moving ahead in building a consensus that will allow the implementation of the policy of freezing oil production, in order to stabilize the hydrocarbons market.
«Good news … meetings are coming in the coming weeks that will be decisive in voting for this agreement,» said the President, following a meeting held in Caracas with the OPEC’s Secretary General, Mohammed Barkindo.
«We have worked hard and the result has to be positive. So welcome again», said the Head of State after welcoming Barkindo.
After the meeting, Barkindo received a musical tribute in the «El Pez que Escupe el Agua» (The fish that spits the water) square (within the government’s palace facilities) with a Christmas «parranda» show, in allusion of the Christmas season.
«We have had an extraordinary day of meetings with the OPEC Secretary General, the historic OPEC, this is our friend Mohamed Barkindo, who is on a tour through all OPEC countries, solidifying a new OPEC consensus, and building a new consensus with non-OPEC producer countries, «said the National President.
For his part, Barkindo stated that he feels very grateful and honored to visit the Venezuelan nation. «Coming here is like coming on a pilgrimage because the idea of creating an organization called OPEC originated in this land … Venezuela has remained being an OPEC champion and as Mr. President Maduro has said, we have faced the longest cycle of the lowest oil prices in the last 60 and 70 years … We are perhaps at the end of this terrible cycle we have lived. We can say that this cycle has no precedence in the World history. »
Likewise, he said that no country, «Not an OPEC member, nor outside the OPEC can say that it is not affected by the downfall in oil prices.»
The meeting was attended by the Minister for Petroleum, Eulogio Del Pino and the Foreign Minister of the Republic, Delcy Rodríguez, and took place weeks before the signing by the OPEC members, during the ministerial meeting of the group that will take place on November 30. In Vienna, Austria, of the agreement on production freeze and the agreements reached with the external producers.

Was dismantled systematic conspiracy of the national right wing

UNASUR: Dialogue is the way to overcome the problems Venezuela faces today

Venezuela denounces new violation of the UN Charter by the US 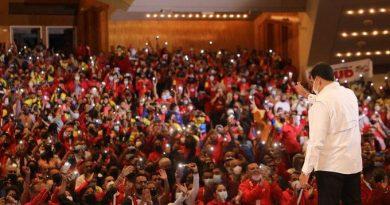