The leader of the United Socialist Party of Venezuela (PSUV), Freddy Bernal, assured this Thursday that today oil has been used as an instrument for the liberation of the Latin American peoples .
«Just as it had served for domination, oil has allowed the liberation of Latin America and we have done it knowingly, that’s why they have this war against President Maduro», from Nueva Esparta state, during the training camp for the youth of the United Socialist Party of Venezuela (JPSUV).
He recalled that Chavez used oil for a strategic alliance in Latin America with the rest of the world, at a time when the US empire was causing havoc in the Middle East, in order to seize the natural resources of the region.
«In this game of global geopolitics, the gringos have always believed they have an obligation to put their hands on the large reserves, and they began by the Middle East», said Bernal.

Maduro: Only dialogue and peace are the way to defend Venezuela 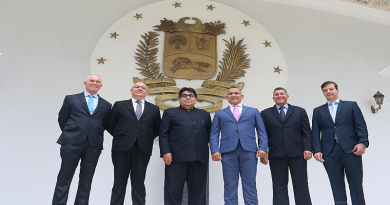 AN will authorize appointment of eight new ambassadors

Julio Chávez: Venezuelan opposition has never spiritually been at the table of dialogue