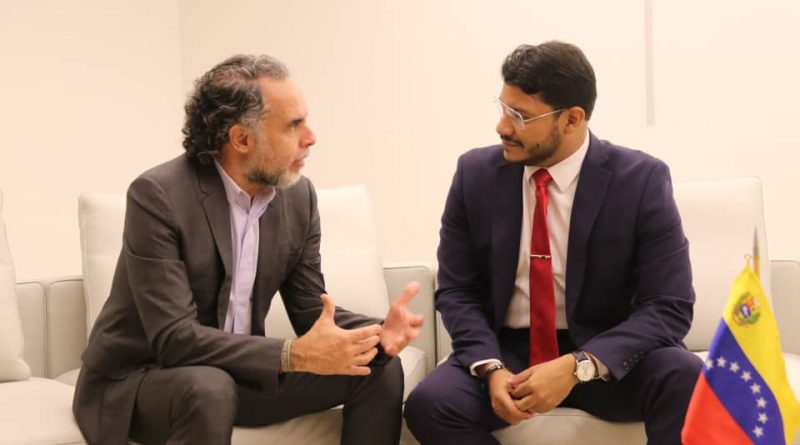 The designated ambassador of Colombia in the Bolivarian Republic of Venezuela, Armando Benedetti, arrived in Caracas this Sunday to present credentials to the Venezuelan Government, in the reestablishment of bilateral diplomatic relations.

The New Granadean official emphasized that “relations with Venezuela should never have been broken. We are brothers and an imaginary line cannot separate us, much less a public policy of the State, as it happened with President Duque”.

He insisted on the priority that he will give to the regularization of binational trade:

«We are going to look for an economic zone, tax exemptions and a legislation that allows the Colombian government to invest in works that impact the development of the region”, emphasized the diplomat.

Ambassador Benedetti is a social communicator. Between 1990 and 1991, he was part of the political and international newsroom of the El Tiempo newspaper in Bogotá.

For the 2006 elections, he joined the «U» Party or Union Party for the People, being elected as Senator of the Republic.

In the Legislative Power, Benedetti endorsed the project that provides social security and property rights to couples from the LGBTIQ+ community.

Likewise, he participated in the debates on the treatment of victims in the justice and peace process, within the framework of the armed conflict.

Benedetti has been a companion of the elected president, Gustavo Petro, since the Senate’s first commission since 2006 and they have ideological coincidences on issues such as the Peace Agreement.

On July 28, he accompanied the Chancellor assigned by Petro, Álvaro Leyva, to a meeting with the Venezuelan Chancellor, Carlos Faría, in the city of San Cristóbal, in Táchira state.

Maduro: «What a pain and sadness my Bolivarian heart feels for the physical departure of G / J Jacinto Pérez Arcay»

Maza: Venezuelan Banking has the capacity to support productive engines

Vice President Delcy Rodríguez: We are grateful for the conscience and discipline of the Venezuelan people against the pandemic

The US pressures countries in Europe not to invest in Venezuela

Attorney General: There is great hope with the municipalization of justice