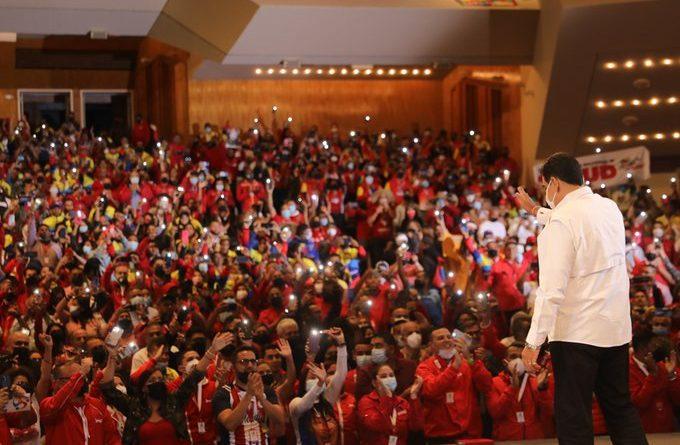 «We will go with an iron hand against all the mafias, however they are disguised, wherever they may be”, warned the head of state.

In this sense, he reiterated his instruction to the Minister for Health, Magaly Gutiérrez, to put an end to the mafias in hospitals: «I have given her all the support and I ask for the support of you governors, mayors, because we have to achieve that all hospitals work fully for the people, without mafias that steal equipment, medications”, he said.

Regarding the Gasoline mafias, he expressed that in this sector «tactical and strategic measures» have been taken, and ordered the Minister of Oil, Tareck El Aissami, to deepen the task of neutralizing these criminal actions:

«The third mafia to attack is the mafia of junkyards. We are going to hit them in the head, so don’t be surprised”, he said by allocating all the legal responsibility in this fight to the Executive Vice-President, Delcy Rodríguez.

In this context, this Saturday, the delegates of the 5th Congress of the PSUV and JPSUV approved the new code of honesty, ethics and revolutionary discipline of the political organization, which consists of 31 articles.

This text was discussed by more than 2,000 delegates and 14,000 Bolivar-Chávez (UBCH) units, congregated at the Teresa Carreño theater in Caracas:

«Honesty has to be the base characteristic of our life as citizens, as combatants of the Bolivarian Revolution’s cause”, expressed Maduro.

In his speech, president Maduro emphasized the importance of ethics and discipline that each revolutionary must assume, at the time of assuming a position in his parish or street, or if he is at the forefront of the National Leading of the Party, emphasizing that this new Regulation will allow to build a new homeland.

To the Militant Youth of the PSUV he reiterated his call not to be fooled, and to ignore proposals that distort the ethical values ​​of the revolution.

Rangel stressed respect for the Constitution by Governors of AD

Rangel: With Fabricio Ojeda, the dignity of the people enters the National Pantheon

Venezuela denounces errors in the Bachelet report at the UN

Maduro: We have the challenge of consolidating peace