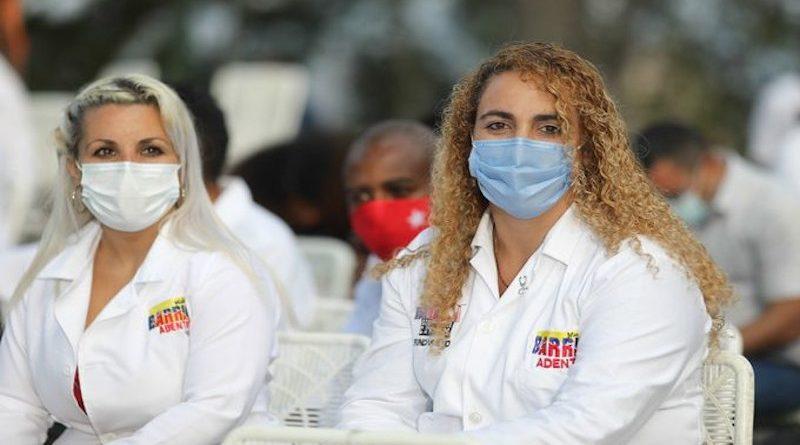 The head of the Cuban medical mission in Venezuela, Julio César García, indicated that this Barrio Adentro Mission registered 1,496 million free medical care since its creation in April 2003.

During the work day to commemorate the 19th anniversary of Mission Barrio Adentro, headed by President Nicolás Maduro, he explained that Barrio Adentro has served in a timely manner to more than 1,496,000 people in these almost two decades thanks to the strategic location of their popular clinics in the heart of the most excluded communities of the national territory.

In this account, García added that the Integral Rehabilitation Rooms, SRI, have treated 174 million people completely free of charge.

In the surgical area, he pointed out that more than 3.2 million operations have been performed, and recalled that «it was in Venezuela where we achieved more than 6,000,000 people served by Mision Milagro (Mission Miracle for Ophtalmological care)”.

Army of white coats against Covid 19:

He recalled the Barrio Adentro Mission was the spearhead to contain and safeguard the health of the population in the communities, «especially in the months of 2020, when covid-19 was beginning to hit the world,» he stressed.

He announced that the Cuban Medical Mission is in the phase of rehabilitating comprehensive spaces to provide quality health, as well as promoting the training of new professionals in the health area:

“We are directing a program to attract 30,000 new students and start their training as doctors of the Homeland”, he pointed out.

New headquarters for the School of Medicine:

Given this proposal, President Nicolás Maduro indicated that the “Dr. Salvador Allende” School of Medicine will have new headquarters, which will be inaugurated to serve the 30,000 students:

«The Salvador Allende School of Medicine is going to have new and modern headquarters, which will be inaugurated with the new course of the 30,000 students of Integral community medicine”, he stressed.

The Venezuelan head of state stressed that this social program will enter a new stage based on the 3R.Nets.

President Nicolás Maduro ordered the application of the 3R.Nets to all missions in order to update and improve everything relevant so that the Venezuelan health system is an example of quality and well-being for the people.

Venezuela is taking steps to get free from the neoliberal model

Russia has given Venezuela a solid and definitive support