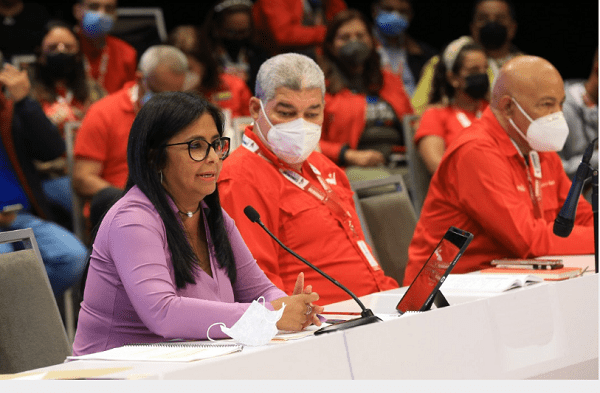 The Executive Vice President of the Republic and member of the national leadership of the United Socialist Party of Venezuela (PSUV), Delcy Rodríguez, participated this Monday in the presentations of delegates in the 5th Congress of the party and the 4th of the Youth of the United Socialist Party of Venezuela (JPSUV), in which she highlighted that the 1X10 method allows the people to direct their resources directly:

“President Nicolas Maduro has told us: 1X10 at the service of the good socialist government for the construction of the Socialist Project in the worst of scenarios, so that in the worst of difficulties we have a course and a north. A method with philosophy, with ethics”, reiterated the leader.

“The Chavista is a loving human being, one who is guided by love for the country, for himself, is guided by dignity, outside of the exercise, those officials who have diverted into bureaucratism, indolence, corruption, arrogance, those for whom it is difficult to listen and understand the people, thus the President has devised a method that, through technological platforms, allows a direct connection with the exercise of the people’s bases”, she said.

Rodríguez also pointed out that when the population participates in an electoral event, the UBCHs are the key element in the organization for the table witnesses and for the campaign: “We invite that organization to also be at the service of a management and we conceive the 1X10 as the political body of society”.

She stressed that the 1×10 is a method, but it cannot be distorted, depoliticized or alienated from the ideological scope. It is a method at the service of the construction of the Socialist Project as Commander Hugo Chávez called it.

During her intervention, the senior official also recalled that President Maduro has said that the success of the Bolivarian Revolution must be based on the construction of the People’s Power. Commander Chávez conceived the party as a space where those who had been excluded from the political and democratic life of our country in the Fourth Republic, had a space to raise their voice.

Venezuela will deliver NAM presidency to Azerbaijan after successful period

More Venezuelans will return from Argentina, Ecuador and Peru