On Saturday, November 13, in the Honor Courtyard of the Military Academy, the National System of Youth and Children’s Orchestras and Choirs of Venezuela (“El Sistema”) will try to register the mark as the largest orchestra in the world gathered in a presentation, currently held by a Russian group that brought together 8,097 participants in 2019.

Children from the age of 12, young people and adults from all over the country will be represented in the 12,000 musicians who will perform symphonic pieces. Under the direction of six directors who will be in charge of the show, which will begin at 5:00 pm and can be followed through the social networks of El Sistema and the Venezolana de Television (VTV) tv station’s signal.

According to the information published in the @elsistema account on the Twitter social network, the attempt to bring together the largest orchestra in the world for the Guinness record represents for Venezuela an emblem of culture for peace:

This Thursday, November 11th, about 7,800 people from the interior of the country arrived in the capital city, most of them coming from states Zulia, Lara, the Andean region and the Greater Caracas, who will travel together with the directors of nuclei, coordinators and trainers to participate in the activity

Among the directors in charge of the show are: Naileth Castro, Urielis Arroyo, María Gabriela Hernández, Andrés David Ascanio, Enluis Montes and Diego Luzardo; they will have the challenge of achieving the largest conducting assemblage.

About 300 independent supervisors accredited by Guinness World Records, plus two on-site music specialist witnesses, will supervise the activity. For its part, an official adjudicator of the Guinness brand will be online.

To preserve the biosecurity measures due to the Covid-19 pandemic,a reduced number of attendees in the auditorium must wear masks, respect the distance and go through disinfection booths at the access points. 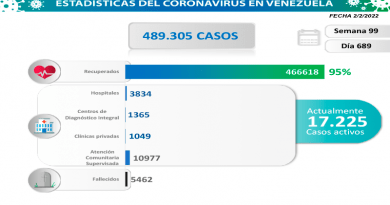 President Maduro: «Whoever wins the elections, we would want a dialogue with the US»

"Trump: you have failed in your plan to take our homeland", Delcy Rodríguez.

President Maduro swore in the new ministers of the Executive Cabinet