The Minister of People’s Power for Defense, General in Chief Vladimir Padrino Lopez, expressed from Zulia state that today more than ever the Bolivarian National Armed Forces (FANB) has the sacred power to defend the independence and sovereignty of the country, which is experiencing a cyclical, historical and circumstantial process, a product of the change from a rentier model.
«All the people of Venezuela and the FANB, as part of that people, know what role it deserves to play at this time of induced and caused convulsions, where unfortunately the armed forces has been subject to systematic attacks against their moral, against their strength», he stressed during the ceremony of delivery of housings to 120 troops in the «Simon Bolivar» housing Development, located in Tia Juana, capital of the Simon Bolivar municipality, in Zulia state.
On this Friday’s journey, framed within the Great Mission Negro Primero, was carried out the sale of food and items of «Mi Casa Bien Equipada» (My well equipped house) program, on the Rafael Urdaneta Military Base, in Maracaibo, and the opening of a supermarket in the Zonal Command 11 of the Bolivarian National Guard (GNB)), as part of efforts for the development of the Local Committees of Supply and Production (CLAP) in the entity.
He explained that the FANB has to be aware of the moment it lives on, and that the weapons of the Republic are to defend the sovereignty, independence and to completely reject any interventionism, the interventionism.
«The pretenses that come from abroad, do not come with a good will, they come with a hidden agenda, promoting violence, division among Venezuelans, causing the rupture of the constitutional order, chaos, and we can not allow this», he said, while highlighting the message of President Nicolas Maduro of strength, steadfastness, loyalty and conscience.
He stressed that the State is giving birth to an economic production model in the context of an agenda that President Maduro, according to the Homeland Plan, designed with 15 engines driving the productive economy, and where the FANB is actively involved as people in uniform.
The Minister was accompanied by the Governor of Zulia state, Francisco Arias Cardenas, and military commanders stationed in Zulia, located to the west region of the country.

Venezuela and China advanced in the creation of joint oil companies 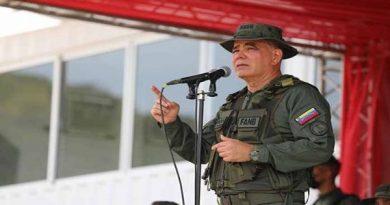 Government of Venezuela plans to reestablish military relations with Colombia

Menéndez: Those who want an intervention can not participate in the Homeland Plan 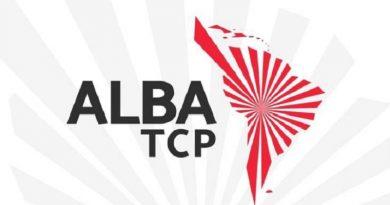 Rodríguez: It is dialogue that prevails in the peace process

CEELA: Venezuelan electoral system is one of the best and most audited in the world