The President of the Republic, Nicolás Maduro, presented the Simón Bolívar 2021 National Journalism Prize on Monday night, at Miraflores Palace.

On June 23 was announced the verdict of the jury made up of journalists Nieves Valdez, Rubén Wizotsky, Wendys Olivo, Alejandro Silva, Ildegar Gil and Alexis Vega.

This year, 257 works were evaluated and a unique prize, an extraordinary one and eight special mentions were awarded for the Bicentennial of the Battle of Carabobo.

Among the awarded works, the television station Telesur stands out with the Extraordinary Bicentennial Prize for the «Noticiero de la Batalla de Carabobo» (Carabobo Battle Newsreel)

Among other categories, the National Prize for Opinion Journalism went to Manuel Palma for the series “El Teletrabajo en Venezuela”, published in the Ciudad Caracas newspaper.

For a new narrative to face the lies:

In his words when delivering the awards, President Nicolás Maduro emphasized the need to take a leap in the communication narrative to confront the lies, violence and hatred that large corporations spread on digital networks, and that threaten the sovereignty of countries.

«We are in a new accelerated era that has changed everything and it is the digital age, the Internet, the social networks that today are hegemonic, massive and of public opinion throughout the world,» warned President Nicolás Maduro, during the delivery of the 2021 Simón Bolívar National Journalism Prize.

As an example of this, he revealed that recent studies indicate that 70% of Venezuelans claim to hear the news through social networks, and only 6% through printed newspapers.

More striking is the case of children and young people, who do not watch television nor listen to the radio, since their world of information and entertainment occurs through the Internet and social networks:

«It is a break of generations that has occurred, we have to get closer to that Venezuela that has emerged and change everything that needs to be changed, to have a technological connection, a new narrative and a new aesthetic”, he explained to the 35 award-winning journalists and communicators.

He pointed out that the Venezuelan Journalism Award must join the battle against the new digital colonialism, which today dominates the world, as the Mexican-Spanish professor Ignacio Ramonet warned.

He reiterated that this new digital colonialism has arisen from the territorial point of view and the exercise of sovereignty, to which no nation escapes.

In this regard, he assured that the new hegemonic era of digital networks, without Law or ethical limits, «has made countries to have lost the possibility of autonomously and sovereignly managing their electromagnetic space, depending on the technological giants”, he warned.

“Now, social networks are communication media that are used and manipulated by powerful private parties who use them for their own interests and whims, they use the networks to promote hatred, violence, coup plotting, to call for a foreign intervention. is that legal, ethical, correct? It will never be”, he warned.

However, he stressed that despite everything, Venezuela is at peace, socially and mentally, with a capacity to react to lies, false news and slander:

“In Venezuela the people appreciate their peace and tranquility, they have put aside the intolerance and hatred that some people had imposed. Because people want the solidarity and courteous, loving treatment that characterizes Venezuelans. «

The Head of State highlighted the work delivered to the winners, a piece designed by Venezuelan visual artists allegorical 200 years after the victory in the Battle of Carabobo.

“It is a beautiful work of art, with three spearmen that accompany Negro Primero, they represent the brave people of Venezuela, (it’s such) a beauty, it will remain for time and this statuette will be remembered as the bicentennial statuette. I congratulate you, I congratulate the Venezuelans, you I convey the pride of having communicating journalists of the quality we have in Venezuela”. 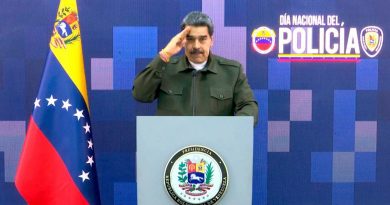 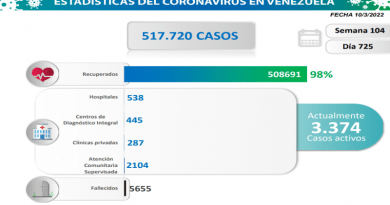 Maduro: The betrayal and cowardice that was imposed on APR-11 brought forth the heroic and brave spirit of the people