During a work meeting with the authorities members of the Council of State, the Constitutional President of the Bolivarian Republic of Venezuela, Nicolás Maduro, announced the creation of a special commission for the deep and accelerated reform of the country’s judicial system.

On this journey which took place at Miraflores Palace, the Head of State reported that this Special Commission will be headed by Deputy Diosdado Cabello in the presidency, and Deputy Cilia Flores in the vice-presidency of said instance, in addition to magistrate Lourdes Suarez Anderson.

In this regard, the national president pointed out that this commission will report directly to the Council of State, and set a period of 60 days for the aforementioned commission “to solve in a profound and humanistic way”, the overcrowding in the preventive detention centers of the country and as well as the regularization «of all the personnel who are being tried”.

He affirmed that Venezuela has the Bolivarian Constitution and a group of laws that guarantee respect for human rights, emphasizing that «We are here to build that social state, of justice, of rights, guarantor of human rights.»

It is worth remembering that the convocation and installation of the Council of State is enshrined in Article 251 of the Constitution of the Bolivarian Republic of Venezuela, which states that “it will be within its competence to recommend policies of national interest in those matters which the President of the Republic acknowledges as being of special importance and where his opinion is required”.

He added that the Special Commission for the Judicial Revolution will have the power to present, in the shortest period of time, a special plan to establish structural changes in the Venezuelan justice system through reforms and new laws among others, therefore, he qualified the role of the National Assembly as vitally important in the fulfillment of these objectives:

«The new National Assembly must support this project to promote the necessary changes in the country’s judicial system, to make it more efficient and humanistic,» he said.

Dialogue is the instrument for hatred not to impose in Venezuela

More than 224 companies will participate in FitVen 2018 business meetings

Maduro rejects new US sanctions: It is a coward measure 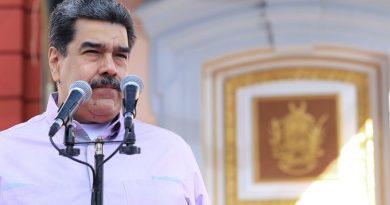 Maduro: The White House warned of the coup attempt