The President of the Republic, Nicolás Maduro, denounced that a group led from the United States planned a conspiracy plan to destabilize the country and intended to take this Sunday the facilities of the Grand Marshal Sucre (Military) Barracks and Command 53 of the Bolivarian National Guard, in Sucre state.
He said that thanks to intelligence work, these conspiracy cells were dismantled and that several of their members have been captured, while pointing out that the goal was to “try to generate violence and tell the world that Venezuela is at war, and bathe the Christmas of the Venezuelan people with blood».
“Attempts of violent skirmishes, of attack on the barracks, which was intended at dawn on December 15. We have begun the dismantling and capture of a group led from the US to try to generate violence in Venezuela, to tell the world that Venezuela is at war. Fortunately, the work of patriots allowed us to dismantle this conspiracy», he said during the 17th Ordinary Summit of the Bolivarian Alliance for the Peoples of Our Americas-Treaty of Commerce of the Peoples (ALBA-TCP) held in Cuba.
Earlier, the Vice President for Communication, Culture and Tourism, Jorge Rodríguez, revealed that this terrorist action was headed by the alternate opposition deputy, Yanet Fermín, appointed as the leader of the gang under the pseudonym «Manuelita»; alternate deputy Fernando Orozco, aka «Oro Negro», along with Venezuelan oppositionists in Colombia, Lester Toledo and Josnar Baduel, and two police officers from Sucre state, Sixto Salamanca and José Miguel Yéguez.
At the 17th Ordinary Summit of ALBA-TCP, President Maduro stressed that 2019 has been characterized by the pretense of right-wing groups, internal and external, against the stability and peace of the country.
He also stressed that these 12 months have been ones of victory, learning and advance of the Bolivarian Revolution. 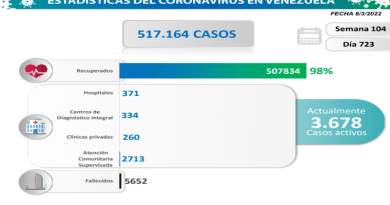 Have been registered more than 30,000 nominations for candidates to the ANC

Public Ministry issued a new communiqué to the ICC

CICPC will have a new legal structure

President Maduro marches this February 4 with the People’s Power

Hinterlaces: 82% of Venezuelans agree with dialogue